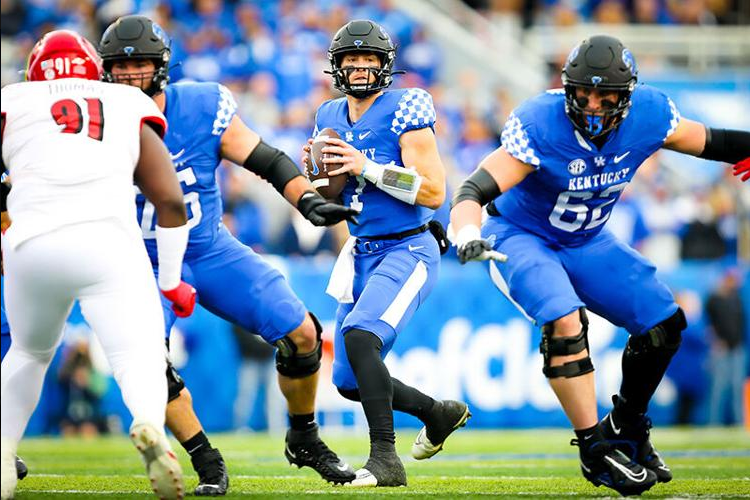 Kentucky’s Will Levis sets up in the pocket against Louisville on Saturday. 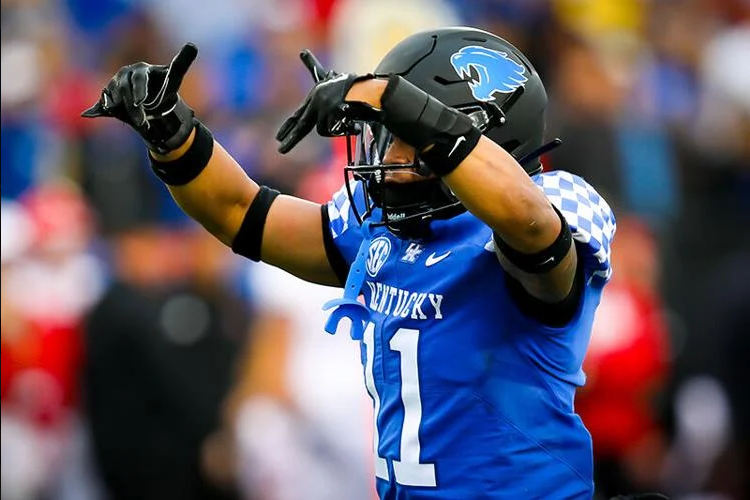 Defensive back Zion Childress gives the L’s Down sign in Kentucky’s win over Louisville on Saturday.

Kentucky’s Will Levis sets up in the pocket against Louisville on Saturday.

Defensive back Zion Childress gives the L’s Down sign in Kentucky’s win over Louisville on Saturday.

LEXINGTON — Kentucky finished the regular season on a high note and take a dose of momentum into the postseason.

The Wildcats (7-5) ended a two-game losing streak — the second of the year — with a 26-13 win over rival Louisville Saturday. Kentucky has won four straight for the second time in the series. The Wildcats kept the Governor’s Cup in Lexington from 2007-2010.

“Our team responded how I believed they would,” Kentucky coach Mark Stoops said. “This game is important and I recognized that the moment I walked in the door when we had a long way to go and they were a consistent top 10 team. … I really appreciate the way they dug in and competed and finished the season.”

Prior to back-to-back losses to Vanderbilt and Georgia to end the Southeastern Conference schedule, a bowl bid was secured following a 21-17 win at Missouri three weeks ago. The team’s bowl destination won’t be announced until next weekend after conference championship games have been decided.

Kentucky’s kicking game, which has been problematic and costly at times this season, came up bigs. Veteran Matt Ruffalo, one of 28 seniors honored prior to kickoff, kicked a career-high four field goals — two in each half that gave the hosts the offense they needed to overcome the Cardinals. His performance earned during the matchup earned him the Howard Schnellenberger MVP Award.

“It was great to see Ruff finish that way,” Stoops said.

Even during the team’s struggles, Stoops stuck with Ruffalo and the rest of the special teams unit. They were on task when it mattered the most.

“I had confidence in him and the team did,” the Kentucky coach said. “I treated him like we always did. He missed a kick or two — it’s a snap. it’s a hold … it’s a lot of things that go into it. … we had to stay the course and and go with the best option we had and he kicked it really solid.”

Unlike last season when quarterback Will Levis rushed for four touchdowns in a 52-21 rout of Louisville, Kentucky managed just two touchdowns — both scoring tosses by Levis — but relied on Ruffalo’s accuracy to maintain a safe distance throughout from the Cardinals.

Building on a solid showing in a 10-point loss to top-ranked Georgia a week ago, Kentucky’s defense stepped it up a notch further against the Cardinals. The hosts forced three turnovers, including Jordan Lovett’s game-clinching interception. Kentucky scored a touchdown and a field goal off two Louisville miscues.

Levis and Chris Rodriguez carried Kentucky’s offense in the final home game of their collegiate careers. Levis threw for 188 yards and a pair of touchdowns, while Rodriguez matched his jersey number (24) in carries and finished with 120 yards.

“It was good to see us have that physicality in the run game,” Stoops said. “We had good balance certainly early and the numbers were big.”

While awaiting their next opponent, Stoops and the Wildcats will enjoy the season-ending victory.

“I’m really grateful for this victory,” he said. “I really feel like our team emptied the tank once again and that’s all you can ask.”