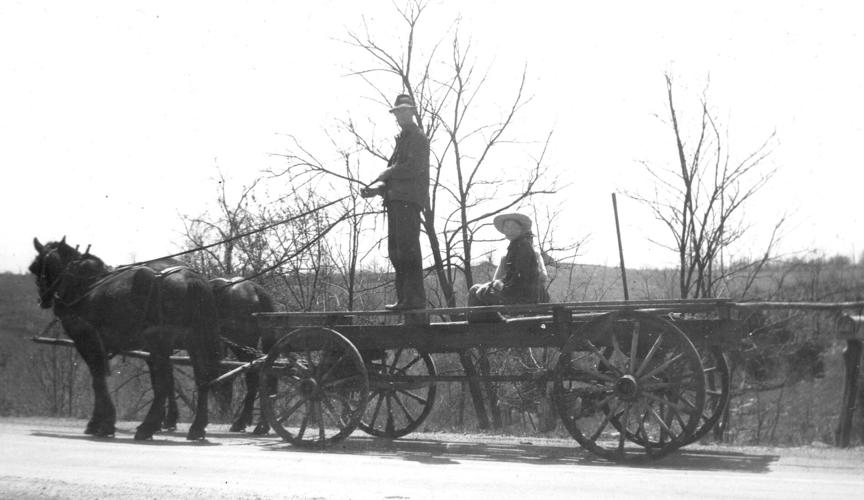 Herman Peach handles the reins of this team of horses as he and Lendon and Billie Gene Hawkins use a wagon to haul a long pole in April of 1943. Billie Gene is hiding behind Lendon. It looks as if the Hawkins boys are actually sitting on the pole to keep it from falling off the wagon.

Herman Peach handles the reins of this team of horses as he and Lendon and Billie Gene Hawkins use a wagon to haul a long pole in April of 1943. Billie Gene is hiding behind Lendon. It looks as if the Hawkins boys are actually sitting on the pole to keep it from falling off the wagon.

Jared Graves was named to the Dean’s list at Kentucky Christian College for the fall 2007 semester. Graves was a 2005 graduate of Anderson County High School, and he was the son of Larry and Bobbi Graves of Lawrenceburg.

The Anderson County High School food drive collected nearly 1500 cans of food and over $700 in cash. The drive was sponsored by The Family, Career, and Community Leaders of America and Future Farmers of America clubs. Students were encouraged to donated non-perishable food items or cash, and the class that collected the most was given a prize.

Molly Kays, Anderson County’s Junior Miss, represented Anderson County in the state competition. Even though Kays did not bring home the state title, she did bring home some great experiences. “Molly’s tired, but she had fun. She worked really hard all week. They started at 7:30 every morning and were still going strong at 10 in the evening. But she had a lot of fun, had some great experiences and met a lot of new friends.”

Anderson County High School associate principal Ronnie Fields, teacher Jennifer Cottrell, and Anderson News general manager Ben Carlson were spending the week at the Marine Corps boot camp in Paris Island, S.C. Their experience was part of a Marine Corps program designed to give people a chance to see what it is like to be a Marine recruit. It was hoped that they could later share their experiences with those interesting in joining the Marines.

Several Anderson County Middle School students brought a pet snake home from school that Monday. The students had been walking home from school when they found a Bald Boa Constrictor near the railroad, and they decided to take it home. The students thought it might have been in hibernation, but it turned out to be dead.

Katie Ware was the cheerleader of the week. She was a sophomore on the Boys’ Varsity Cheerleading team, and she had been doing cheer for 4 years. Her favorite class at school was algebra, and she was the daughter of Bob and Pam Ware.

A fire was spotted in the By-Pass Motors sign on the roof that Tuesday morning. Anderson County volunteer firefighters were called to the scene and doused the fire. Minimal damage was done, but it was estimated that a new sign could cost several thousand dollars.

A dedication was to be held for the new steeple and perch at Fairview Christian Church. The steeple had been put up in November of 1992, and it was the first time in the history of the 101-year-old church that a steeple had been erected.

Andrea ‘Shae’ McEwen was named to the Dean’s List of Hanover College for the fall semester of 1992. She was a senior political science major, and she was the daughter of Mr. and Mrs. James McEwen of Lawrenceburg.

A speeding car wrecked into a home on U.S. 62. After plunging off the highway, the car tore into a large corner fence post, side-swiped the telephone pole, and crashed into the side and front of the house. Robert Floyd Peavler, 21, and Alvin Vineyard, 21, were injured in the accident, and both were taken to the University of Kentucky Medical Center in serious condition.

Miss Sherri Frances Williams of Lawrenceburg was named to the honor roll at Transylvania University. She was a freshman at the university and had earned a GPA of 3.94 for her first semester. She was the daughter of Mr. and Mrs. Charles Williams.

Thomas Cotton was named a board member of the Anderson County School Board. Cotton was filling in the vacancy left by Mrs. Nellie Ballard when she retired.

The Anderson County Bearcats beat Oldham County 68-58 in that Saturday night’s basketball game. The game’s highest scorers for Anderson County were Phil Hoskins with 20 points and Greg Higgins with 17.

A call went out the week before to drop off old razor blades at the news office for the war effort. Since then, nearly two shoeboxes full had been collected. It was said that not a day had passed that week without someone bringing in a package of blades.

W. Arch Bennett of Henderson was to take the place of Dan Talbott as State Commissioner of Finance.

Sixteen young men of Lawrenceburg left the county to be inducted into the army. They left on the Cooper bus to Cincinnati where they were to get physical examinations. If they passed, they were granted a seven-day furlough to return home before joining the army.

Mrs. Harry Whayne of the Columbus Homemakers Club in Hickman County found a way to stretch her coffee ration. To every tablespoon of coffee, she would add two tablespoons of roasted, ground soybeans. “My husband likes it better than when all coffee is used,” said Mrs. Whayne.

The western, “Apache Trail”, was showing at The Lyric that Friday and Saturday. “Ball of Fire” was showing Sunday and Monday. “Brooklyn Orchid” was showing on Tuesday, and “Remember Pearl Harbor” was showing Wednesday and Thursday.

The Louis Ragan property in Alton was sold at auction to Joe S. Robinson for $1,850.

Rev. M. D. Morton was appointed as the Community Service Member of the Local War Price and Rationing Board. “Selection of Rev. Morton for this important job means that prompt and accurate information concerning rationing and price control will be disseminated in this community,” said chairman of the board Wm. B. McGurk.