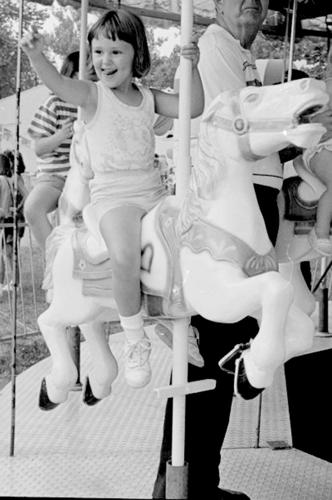 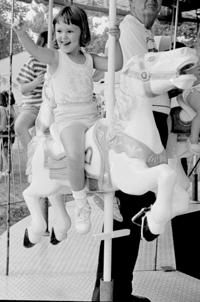 Jessica Moore waved at her friends on the sideline as she raced around the merry-go-round on her white horse at the Lawrenceburg Fair in 1991. Jessica, 4, is a daughter of Roy Moore and Roberta Moore. 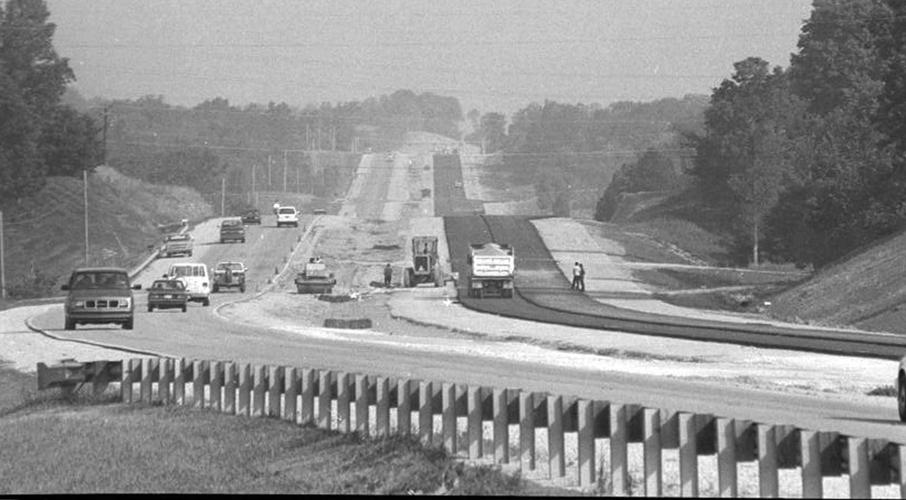 Work was progressing steadily on the four-laning of U.S. 127 across Anderson County in 1991. This view was looking toward the Carlton Drive Intersection. 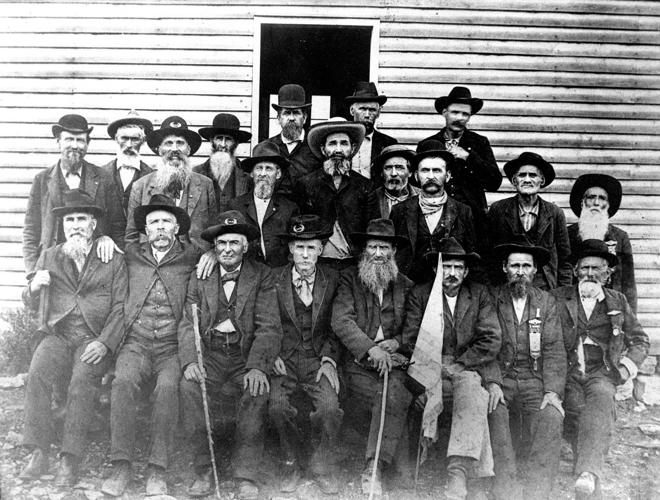 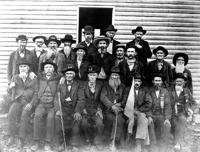 Jessica Moore waved at her friends on the sideline as she raced around the merry-go-round on her white horse at the Lawrenceburg Fair in 1991. Jessica, 4, is a daughter of Roy Moore and Roberta Moore.

Work was progressing steadily on the four-laning of U.S. 127 across Anderson County in 1991. This view was looking toward the Carlton Drive Intersection.

The annual Lawrenceburg Fair and Horse Show were greatly anticipated, as plans were advertised and schedules announced. The festivities were due to start off with the Renfro Valley Barn Dance, a troupe of talented musicians and performers. The horse show was due to start on the following day. Although the director of defense transportation Joseph B. Eastman suggested all fairs be cancelled, he sanctioned the Lawrenceburg fair. He said county fairs might proceed “in cases of fairs where the amount of travel would not be greater than going to town for marketing purposes.”

Dr. J. Sprole Lyons passed away in Decatur, Georgia. Dr. Lyons had previously pastored at the local Presbyterian Church for his first pastorate. While living in the area, he was wed to Miss Wallace Lillard of Lawrenceburg. She preceded Dr. Lyons in death by a number of years. Services were held both in his home in Decatur as well as in the home of Mrs. W.E. Dowling, niece of the late Mrs. Lyons, upon the arrival of the body in Lawrenceburg. He was laid to rest in the Lawrenceburg Cemetery.

The Fox Creek Electric Corporation held a large outdoor meeting and fish fry at the fairgrounds. The meeting was to read reports from the year prior, discuss any pertinent information for the coming year, and elect officers. The Lawrenceburg High School band was in attendance to play the national anthem as well as other tunes throughout the day. W.O Moffett was re-elected president of the corporation, as was Frank Routt to the position of treasurer-secretary. Superintendent Roy York and local banker J.W. Gaines also addressed those in attendance.

The American Legion worked hard as they advertised for the 100th anniversary of the Lawrenceburg Fair and Horse Show. Officials said all horse stalls had been sold out, signaling a good turn out for the horse show. 400 horses were expected, with some exhibitors reserving stalls before they left the previous year’s fair. Originally called the Anderson, Franklin, and Salvisa Agricultural and Mechanical Association at its founding in 1872, the festivities were moved to Lawrenceburg in 1874.

Two Anderson County natives were recognized for their exceptional collegiate grades for the spring semester. Miss Christy Brown, daughter of Mrs. Thurman Brown and the late Mr. Brown, made the Dean’s List and was a President’s Scholar at Western Kentucky University following her perfect 4.0 GPA. Mrs. Cecil McFarland, daughter of Mr. and Mrs. W.J. Smith, achieved a 4.0 GPA while attending Eastern Kentucky University.

Vandals struck the Sand Spring School for the second time. Sheriff Paul Catlett and Deputy Sheriff Harold Birdwhistell received a large amount of pencils and plastic containers of ketchup that were allegedly taken from the school, and upon returning them, found two back windows were unlocked. When principal Gary Stinnett investigated further, he found that vandals opened a locked down to a basement storage room, took several bottles of glue along with nearly four gross of pencils, and several rolls of cellophane tape. They then broke a door to gain entrance to the lunchroom, spread ice cream sticks in the kitchen, pried open a deep freeze and removed several pounds of butter, and squirted mustard on the floor and down the halls as they made their escape.

Emma B. Ward hired a new principal to replace Glenn Karsner. Sweat was a former nun in northern Kentucky. She also served in two Louisville parochial schools as an administrator. The hire was the county’s second principal selected by a school based council. Karsner, who’s retirement prompted the hire, stated that council members Charlotte Puckett, Marilyn Jupin, Marilyn Hughes, Sue Thurman, and Rodney Cunningham “did a beautiful job” with the hiring process.

Mabel Carlton of 123 Center Street saw her home erupt into flames. Both city and county firemen were called to help get the blaze under control. Everyone inside the home was able to make it out, but the home was considered a total loss. The fire was believed to have started in the kitchen of the residence, and was called in by Carlton’s nephew, also a resident of the home.

Members of the Lawrenceburg Downtown Business Association voted to hold their next downtown sidewalk sale/flea market in conjunction with the 127 Yard Sale set to begin on August 20 of that year. The hope is that the large amount of traffic generated by the sale would be able to detour into the downtown area.

A downpour commenced shortly after the American Legion’s annual Fourth of July parade through downtown Lawrenceburg. The area had been experiencing a significant dry spell, but the rain signaled a brief respite. The countywide burn ban was lifted by county fire chief Mike Barnes and county Judge-Executive Steve Cornish. The 2-3 inches of rain helped the situation, but more rain was ultimately what the area desperately needed. “We’re still severe drought status, but the rain is going to make a huge difference,” county extension agent Tom Yankey said.

Sports editor John Herndon and staff writer Jay Cason both received awards sponsored by the Louisville chapter of the Society of Professional Journalists. Herndon received first place in the non-metro Louisville category for a feature on Coach Peach. Cason secured third place in business reporting in the non-metro category.

The Lawrenceburg city council backed off from a decision on the sale of alcoholic beverages on Sunday’s within city limits. After nearly six months of gridlock, the proposal was to be discussed at the city council meeting. After a brief discussion, however, those in attendance were caught off guard when the council voted to table the discussion for another month. “I guess we’ll have to keep on trying until we wear you down,” local businessman Jerry Crawford remarked.

The local fundraising event held by Relay for Life shattered their 2007 goal, collecting $72,408. 115 cancer survivors were recognized as people of all ages walked to raise money for cancer research.