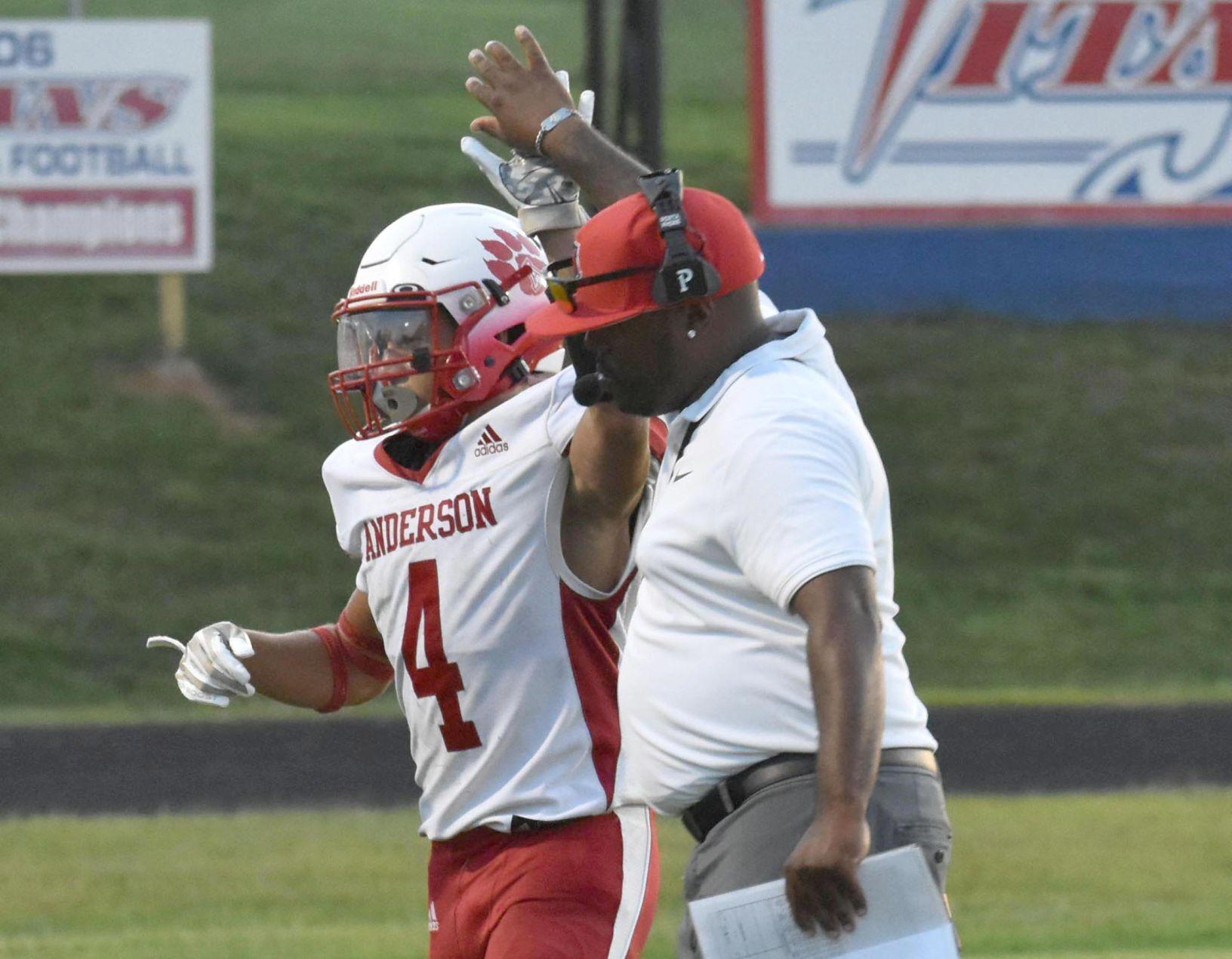 Higgins gets a high-five from coach Scrap after a scamper into the end zone.

Sarah and Quinn won the championship off lead agility and high point in trial for agility.

Luke and Colt Buckley were the big winners for the dairy cow category.

Mara Lewis competes in state competition, winning for her division.

In the dog category, Sarah and Quinn were announced as champion off lead agility and high point in trial for agility. Sarah and Cindy won the championship for open showmanship.

As the Kentucky State Fair drew to a conclusion, several Anderson County residents were recognized for their achievements. From arts and treats to animal husbandry and showmanship, the Anderson County 4-Hers proved to be supremely talented.

Anderson County Judge-Executive Orbrey Gritton poses for his mugshot, picked up by the Lawrenceburg Police for the annual Cop4Kids fundraiser.

Lawrenceburg PD Chief Bryan Taylor and Autumn Boblitt both show their support for the fundraising efforts.

On the busy U.S. Hwy 127, you have to get creative to get the attention of passing traffic.

Anderson County Clerk Jason Denny serves his stint in the cage, maintaining a smile while he does it.

Donors came to bid on items and spend time in the cell, but stayed for the fresh Auntie Anne’s pretzels.

Jeri Lynn Carmickle serves her time, all while collecting donations to help bail her out.

With a bit of creativity, the pop-up canopy and chain link converted to a make-shift cell to house good-sported donors.

Pamela Robinson from the circuit clerk’s office was one of the stream of county employees who joined in the fundraising fun.

The Lawrenceburg Cash A Check featured some added festivities Friday, with the annual Cops4Kids fundraiser drawing people in to see their friends locked in a “jail cell”, to bid on quality items, and to grab a snack.

Auntie Anne’s Pretzels had a food truck set up in the parking lot of Cash A Check, located on the US 127 bypass.

The parking lot also featured a chain link cage set up with a cot and a few chairs for those who were “locked” inside. Donors could pay to have coworkers, friends, or family to be picked up by Lawrenceburg police and put in the constructed cell. While inside, their stay could be extended by donation.

Inside the Cash A Check storefront, individuals could bid on silent auction items. Those included car wash supplies, crafts, candles, gift baskets, and a watch. Businesses and individuals in the community graciously donated the auctioned items.

The final fundraising amounts are still being tallied at the time of publication, but will be shared this week.

Auditing standards require the auditor’s letter to communicate whether the financial statement presents fairly the receipts, disbursements and excess fees of the Anderson County Clerk in accordance with accounting principles generally accepted in the United States of America. The clerk’s financial statement did not follow this format. However, the clerk’s financial statement is fairly presented in conformity with the regulatory basis of accounting, which is an acceptable reporting methodology. This reporting methodology is followed for all 120 clerk audits in Kentucky.

The auditor noted no instances of noncompliance. The auditor also noted no matters involving internal control over financial reporting and its operation that were considered to be material weaknesses.

The county clerk’s responsibilities include collecting certain taxes, issuing licenses, maintaining county records and providing other services. The clerk’s office is funded through statutory fees collected in conjunction with these duties.

The full audit report can be found on the auditor’s website.