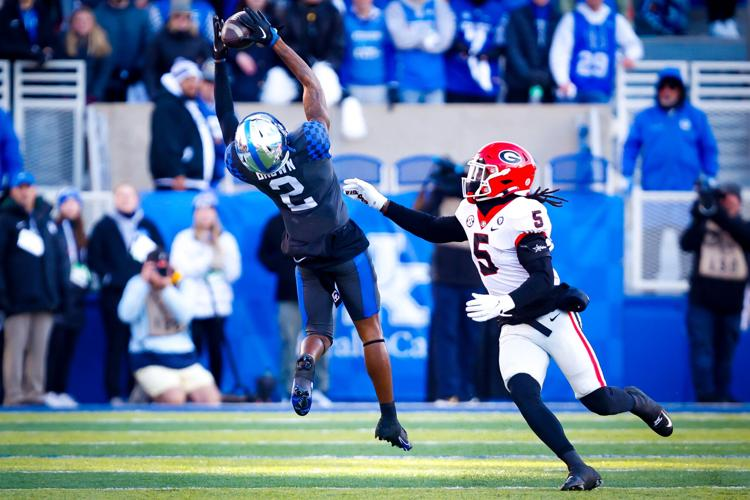 Baron Brown makes a catch in the 4th quarter. Brown made 10 catches for 145 yards and a touchdown.

The start of the high school basketball season is closely approaching across Kentucky. For Anderson County, though, the Glen Drury Classic kicked off basketball action on Saturday.

Beginning at 10 a.m. with the sixth grade boys team, the hardwood stayed occupied for the entire day. All three middle school boys teams played Shelby West, followed by the JV and varsity Anderson County Lady Bearcats. After they finished, it was the freshman, JV, and varsity boys squads that finished off the night.

The good news for Mustangs and Bearcats fans is that the home squads enjoyed a great deal of success. The sixth grade team suffered a setback, falling to the visiting Warriors 63-20. The seventh grade team showed out in game two, winning by a comfortable 62-36. For the final Mustangs game, a strong fourth quarter push helped expand their double-digit advantage. The eighth grade team won 48-33.

For the high school squads, Saturday’s games were a scrimmage, as the regular season does not begin until November 28 for both boys and girls varsity teams. However, the effort and physicality demonstrated would indicate that they are ready to perform when that day rolls around.

The scoreboard went back to zero after each quarter, breaking the four quarters of action into mini-game scenarios.

The Anderson County freshman boys faced off against East Jessamine in their matchup. The visiting Jaguars were outgunned, but managed to stay competitive throughout the contest. Each quarter went in favor of the Bearcats.

Anderson JV boys’ were closely played, knotted up at 9 after the first quarter. The East Jessamine team managed a slight advantage in the second quarter, with the Bearcats coming out and managing a tough fight in half number two.

The varsity Bearcats came out shooting, but were matched in the first quarter, with the score tied at 12. They responded with a strong defensive effort, leading in the second quarter. For the third quarter, fouls became a growing theme, especially for the Jaguars. The opposing coach was assessed a technical for arguing with officials, which resulted in an easy two points for Anderson. The Bearcats doubled the offensive production of their opponent in the third quarter. The final one was more of the same, as Anderson cruised to a victorious conclusion of action.

Further game coverage, including photos, coach interviews, and statistics will be available in next week’s edition of the Anderson News.

Both teams begin their season next Monday, November 28. The boys play Henry County and the girls play North Oldham. Both games will be on the road, beginning at 7:30 PM for the varsity.

Main Street was glowing Friday, as the city celebrated the coming holidays with “Light Up Lawrenceburg”.

The darkness of the November evening sky contrasted with the bright glimmering Christmas lights, a sign that the holidays are closeby.

“I really love light up Lawrenceburg,” said Joseph Marshall, “because it brings our community together and anything that can bring people together we will support, people of the community love thing’s like this…”

Light Up Lawrenceburg was lit on Friday. Despite the unusually cold temperatures, Main Street was nearly overflowing with visitors, and a festive spirit surrounded the evening.

The night began in traditional style with Christmas caroling; as, the Anderson County high School Chorus made its way down Main Street singing Christmas selections such as Rudolph the Red Nose Reindeer.

Early in the evening, many pedestrians decked out in scarves, coats, and hats filled the streets. Pedestrians could be seen shopping, sipping hot chocolate, and enjoying the Christmas carols. The kids even got in the fun as they enjoyed the chance to get photos with the Grinch and Hank the horse.

Finally, Mayor Troy L. Young stood up to welcome everyone to the event, and the crowd gathered to watch. Following this introduction, the Lawrenceburg Academy of Performing Arts performed several Christmas selections, and everyone got ready for the special event of the night: lighting up Lawrenceburg.

As Mayor Young once again stood up to start the “Light Up Count Down”, excitement built. County Judge Executive Obrey Gritton also joined Young for the Count Down, and several children were allowed to come up and help. When everyone was ready, Mayor Young, Judge Gritton, and the children lead everyone in a countdown. The crowd excitedly joined in the chant as they counted down from 10. Finally, when the number one was yelled out, the lights were turned on, and Main Street was lit up in a merry glow. Cheers followed as everyone turned to admire the display.

In the glow of the newly lit lights, the Anderson County High School Dance Cats got up and performed several dances choreographed to Christmas songs.

The students were decked out in bright red Christmas sweaters, and children piled around the temporary fence that separated the dancers from the crowd. When the dancers struck their final pose and walked off the street, the crowd was directed to head down to Century Bank Park for the remainder of the festivities.

Next, a few of Santa’s elves decided to join the party. Decked with Christmas hats and pointy elf-ears, the Emma B. Ward Have Singers continued the Christmas carols with a few of their own.

As the event started to wrap up and as fingers started to go numb, the Emma B. Ward librarian, Tanya Blackhurst, gathered the children on stage before reading a Christmas story to the gathered audience.

Just as the event began to wrap up, Santa arrived for the final event of the night, and the Anderson County children got a chance to meet and visit with good old Saint Nick.

Throughout the night, Christmas spirits seemed high. Many families could be seen taking the opportunity to grab photos at the various Christmas displays, and many took advantage of the free cookies being given away by Lois Ann Disponett Real Estate.

Overall, this year’s event kicked the Christmas season off on a bright note and really lit up Lawrenceburg.

Kentucky farmers donated $606,223.11 to the Ag Tag Program for 2022, bringing the total of donations to more than $4.3 million since 2016. “I want to thank everyone who donated to the voluntary ‘Ag Tag’ program this year. 2022 has been a tough year, but despite that, our agricultural community still saw the benefit of donating to the ‘Ag Tag’ fund,” Commissioner Quarles said.

“Through the years, the Ag Tag Program has succeeded in providing much-needed funding for promoting agriculture and educating Kentucky’s youth on the importance of agriculture in our everyday lives. Your generosity will help ensure Kentucky agriculture has a bright future.”

The voluntary donations are divided equally among Kentucky 4-H, Kentucky FFA, and the Kentucky Department of Agriculture (KDA). This year, each group will receive $202,074.37. Since 2016, Kentucky FFA and Kentucky 4-H have received, collectively, more than $2.9 million from donations made by ag producers renewing their vehicles each year.

The KDA uses its share of the Ag Tag funds for various programs such as the Ag Athlete of the Year awards, the Kentucky Leopold Conservation Award, Kentucky Women in Agriculture, and the University of Kentucky Grain and Forage Center of Excellence.

“We give half of the funds given in each county back to the local chapters in that county, so this means a greater impact in each community. We also use Ag Tag donations to fund Ag Achievers grants, which offer much needed technology upgrades to agriculture classrooms across Kentucky, provide travel scholarships to our students competing at National FFA Convention, and provide a great experience for our students at the Kentucky State Fair. The Ag Tag program has become a vital part of accomplishing our vision of Growing Leaders, Building Communities& Strengthening Agriculture.”

The Anderson County FFA Chapter received $1,758.33. These funds will be used locally to help support students’ opportunities within the FFA organization by providing each agricultural education student with an FFA membership.

In Anderson County, 64.6% of folks that purchase a farm tag make the donation. If 100% of our community made the donation it would generate $2,718.33 for our Ag Ed Program. Kentucky motorists who buy or renew farm vehicle license plates, or “ag tags,” may make a voluntary donation of up to $10to the Ag Tag Fund. Half of the 4-H and FFA funds go back to the county where the tag is purchased,where both organizations use the funds to support local programming, awards, and scholarships.

Learn more about how you can support the mission of the Kentucky FFA Foundation at kyffa.org/ways-to-give