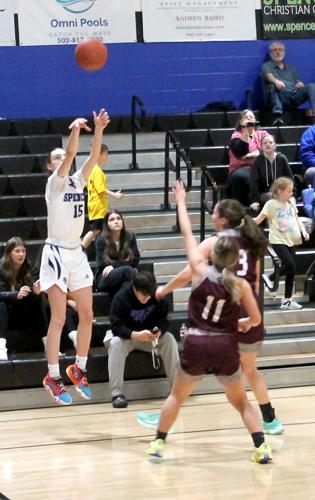 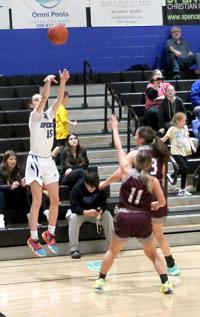 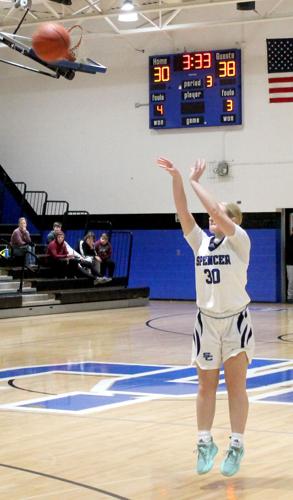 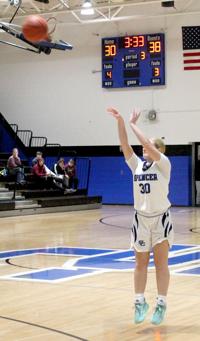 Bailey Weyrauch scores from beyond the arc in the home game win against Owen County.

Bailey Weyrauch scores from beyond the arc in the home game win against Owen County.

The Lady Bears hosted Owen County on Jan. 14, and came up with a come-from-behind two-point win, stopping a six-game winning streak for the Lady Rebels. This win came just one day after another Regional battle win vs. Shelby County on Jan. 13.

The wear and tear from playing two games in a row showed on the Lady Bears, with missed goals and turnovers early in the game, but the young team found a second wind in the clutch to close in on an 11-point deficit to win with a final score of 56-54.

This is the Lady Bears’ fifth win in a row, with the last loss coming from Danville Christian on Dec. 30.

The Lady Rebels had the first possession of the game, and would score first at the 7:28 mark, with Junior Ella Brown (15) scoring two 80 seconds later. Senior Daveigh Reichenbach (22) scored back-to-back two’s, thanks to a steal, giving Spencer their first lead of the game at the 4:55 mark, with a score of 6-4.

Both teams struggled with turnovers, and went toe-to-toe at scoring, with the difference being Owen County made their points from beyond the arc, with Spencer County mostly making theirs from within the paint.

Sophomore Bailey Weyrauch (30) would sink a 3-pointer at the five second mark to help close the distance, with a score of 13-17 at the end of the first quarter.

The Lady Bears would come out charging in the second quarter with Weyrauch scoring two in the first 10 seconds, and after a Lady Rebel turnover, Brown would go two-for-two from the free throw line to tie the game at 17 all.

Brown, Freshman Braelyn Cundiff (2), Freshman Gracie Brown (31), and Reichenbach would all add points to the board, but the defensive pressure of the Lady Rebels would prove to be too much for the Lady Bears to handle, forcing them to have turnovers and miss shots, with an eight point deficit at the end of the first half, with a score of 25-33.

Reichenbach would be the first to score in the second half, but missed free throw shots by E. Brown, and back-to-back turnovers under the basket would lead to no more scoring by the Lady Bears until the six minute mark, where E Brown would go one-for-two from the free throw line.

Owen County would not score until the 5:10 mark with a 3-pointer, but would continue to sink their shots, getting ahead with the largest lead of the game, 11 points, with a score of 32-43. A 2-pointer from Reichenbach would help close the gap, with a score of 36-43 at the end of the third.

The end of the third would also be the tipping point of both teams’ frustration with the play calling of the officials. They seemed to have a hard time agreeing on calls, and who should have possession of the ball on several occasions. Oral arguments towards not only the officials, but players, coaches, and other fans, from the visiting team’s supporter section highlighted the intensity and the importance of this regional matchup.

Reichenbach would start the scoring for the Lady Bears in the fourth quarter at the 7:21 mark. Spencer County would bump up their defense, causing Owen County to make back-to-back turnovers, with both Reichenbach and Weyrauch scoring, giving the Lady Bears back the lead at the 5:40 mark, with a score of 44-13.

Both teams would continue to score, going toe-to-toe, exchanging the lead. A 2-pointer from under the basket by Reichenbach, and an Owen County turnover that would lead to a 3-pointer by Weyrauch gave the Lady Bears a four-point lead with under three minutes in the game.

The Lady Rebels would score two, and a Lady Bear travel would give the ball back to Owen County with 1:24 left to play. Both teams would start to foul, putting all the pressure on those players at the free throw line. The Lady Rebels would come within a point to tie the game, but Weyrauch would go one-for-two putting the Lady Bears up by two with 1.6 seconds left in the game.

Owen County would go for a Hail Mary from beyond the half court line, but would come up short, giving Spencer the win, with a final score of 56-54.

Senior Daveigh Reichenbach (22) led the team in points with 24, scoring on 10 out of 17 2-point attempts, and four-for-four from the free throw line, and also led the team in rebounds, with six.

Junior Ella Brown (15) had a total of 15 points, scoring on five out of eight 2-point attempts, and five out of 14 free throws attempted, and had five rebounds.

Sophomore Bailey Weyrauch (30) had a total of 11 points, going two-for-two within the paint, two out of seven 3-point attempts, and one out of two free throws attempted, and had two rebounds.

Freshman Gracie Brown (31) had a total of four points, scoring on two out of five 2-point attempts, and had four rebounds.

Freshman Braelyn Cundiff (2) scored two points from within the paint.

Sophomore Hawley Johnson (00) had one rebound.

Junior Skyler Mills (10) had one rebound.

The Lady Bears are now 13-3 on the season, and second in the district behind Anderson County.