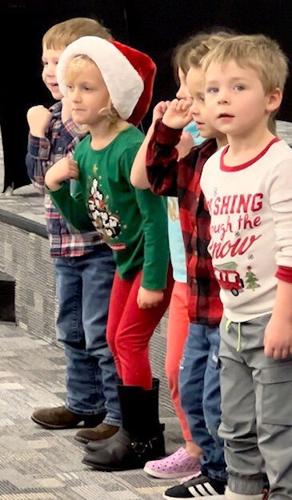 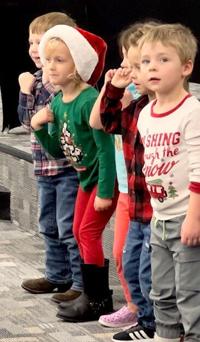 Preschool students performed for those in attendance at the school board meeting Dec. 19. 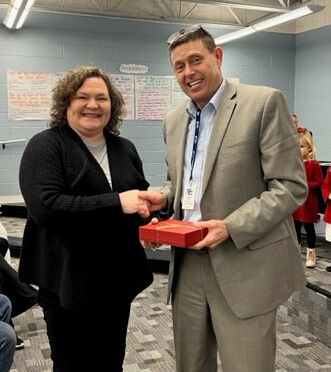 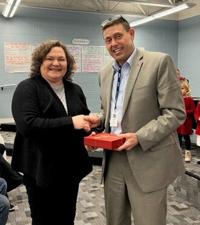 April Roberts, SCHS consumer science teacher, posed for a photo with acting superintendent Chuck Abell after receiving the Making A Difference Award on Dec. 19 at the board meeting.

Preschool students performed for those in attendance at the school board meeting Dec. 19.

April Roberts, SCHS consumer science teacher, posed for a photo with acting superintendent Chuck Abell after receiving the Making A Difference Award on Dec. 19 at the board meeting.

At the Dec. 19 Spencer County School Board meeting, the board approved the mediation between the school board and Hannah Jaggers. District 3 Elk Creek board member Aaron Erhardt abstained from the vote.

The lawsuit was filed in May of 2021 against the district by former TES teacher Hannah Jaggers, alleging that Superintendent Chuck Adams made inappropriate comments, and contacted her by phone and text on numerous occasions over the course of the past couple of years.

The allegations did not include any overt sexual comments, but behavior that the lawsuit said made for a “sexually hostile work environment.”

The exact amount was not discussed in open session, but it was noted that “an amount was agreed upon in mediation between the insurance carrier and Hannah Jaggers.”

The settlement amount will come directly from the insurance company, and will not be taken out of district funds.

This was an important step in the process of resolving the district’s legal battle with the embattled superintendent, so it is expected to expedite that process.

April Roberts, SCHS Consumer Science teacher, received the Making A Difference Award for helping the culinary students excel in their field. The students have catered several district events, and will be catering the upcoming chamber of commerce luncheon on Thursday, Jan. 19.

Preschool academic report, preschool students entertained those in attendance with Christmas carols at the meeting on Monday.

Preschool coordinator Bob Coots gave an update on the preschool, including attendance numbers, and concerns.

1. Supper with the Super — The second event was held on Dec. 8 at the high school, with the attendance being similar to the first event, with about 30 people attending. The conversations were focused, and will be useful in helping develop the district’s strategic plan. Abell will meet with students after the first of the year, and they will then begin drafting a formal document for the board’s review.

2. Calendar Committee — The initial meeting of this committee took place on Dec. 20th in the board meeting room. “My guidance to the committee is simple… If you take a day, then you must find a day,” said Abell.

3. NTI — “My thoughts on NTI are well documented… I do not like to use them. No one has yet to convince me that what students are required to do during NTI is of the same quality as they get in front of a teacher. However, I realize that no one likes going to school well into June. We have had conversations around the use of NTI during snow closures. All schools have a plan in place, and are ready if we were to use this option at some point,” said Abell.

4. Vaping — Vaping in the schools continues to be a problem in the district, and Abell has been asked on several occasions what the board could do to help with this problem. “Since we have returned from COVID, vaping by students has been one of the greatest disciplinary challenges that we face, both at the high school and middle school level. There are sensors that can be purchased, that detect vaping in the schools and could be a deterrent. Oldham County schools have this system in place already. The only concern with it is, the sensors send emails to a determined administrator, and that administrator in Oldham receives eight to 10 emails an hour, making it difficult to do the other duties that is required in that position. Abell has asked the high school to compile information for the next board meeting.

Abell presented to the board his self-evaluation as acting superintendent, and the board will look it over and discuss in closed session at the next school board meeting in January.

Abell gifted all the board members monogramed cups and bags from the high school graphic design department for Christmas, and reminded them that the students are selling items as a fundraising tool.

Joe Montgomery with White & Company PSC presented to the Board a summary of the audit report which was submitted to the Kentucky Department of Education in November. The audit was clean, but had some small issues that may have to be addressed in a few years. Some other future potential aspects are the fact that ESSER funds will run out in the 2023-24 school year, and with the low attendance issues, ADA funds will also be less than in other years.

An estimate in the amount $7,278.00 from Gatterdam Industrial Services for the SCES/SCMS Sewage Pump (grinder pump) Lift Station was presented to the board. The pump broke, and another was already ordered before the meeting because it is a necessity. The measure was a formality, and the money spent was already in the budget.

An estimate from Toadvine Enterprises was reviewed for the gym bleacher seats at Spencer County Middle School. The board voted unanimously to have Toadvine install 10” royal blue ESM seats in the amount of $17,600.

TES had planned to utilize this year’s allocated ESS funds for a part-time teacher, but the person previously in that role was not able to fulfill the position this year. The TES SBDM has voted to reallocate these funds for a full-time classified position for the remainder of the year.

The board unanimously approved the addition of this position. This change will be fully funded from ESS (grant) funds.

The school district has experienced remarkable growth in recent years. Metrics related to the school district’s personnel show significant growth: new hires (79% since 2017), job postings (71% since 2017), and volunteer checks (2021 — 133, 2022 — 489, 2023 — 640 through December 2022). Each of these areas requires an extraordinary amount of time. Other areas not easily quantified, but that have also experienced growth, include the number of substitute employees, student workers, and student interns.

A statistic that has not seen a comparable increase is the number of employees in the personnel department. In fiscal year 2017, there were one full-time and one part-time positions in the department, and there are currently two positions. The metrics continue to increase dramatically, and other responsibilities and mandates are following a similar trend. The requested change is to add another position, Onboarding Specialist, to address the year-round need for assistance with prospective and existing employees. This position would assist in many other areas as well, and would free up time for current employees within the department to address areas that need more attention.

The cost of this change, $50,500 with benefits, would come from the General Fund contingency and would not have a significant impact on the contingency percentage, and the board voted unanimously to add the position.

The committee consists of:

The first DFP meeting will be held in late January or early February, depending on the scheduling concerns of the architectural firm and bonding agency.

Communications from Board Members

District 5 Little Mount/Mt. Eden board member Sandy Clevenger spoke about the success of Christmas on Main Street, and how it would not have been successful without the support of the district, most importantly, Abell, Tim Prathers, and Steven Rucker. They made sure that the Early Learning Center was available and ready to host games and food after the parade.

District 3 Elk Creek board member Aaron Erhardt had some concerns about the payment options at local sporting events.

Several members of the community voiced frustrations to Erhardt over the fact that they are still not accepting cash at the gates of the sporting events. “They find this to be an unnecessary inconvenience, and the current set up charges an extra fee of $1 per ticket (which doesn’t even go to the school). I pointed out that all of our surrounding districts are back to accepting cash, and we have no problem taking cash at our concession stand or at halftime for “split the pot.” I urged school administrators to please consider bringing back the cash option,” said Erhardt.

At press time, there was no indication of any changes to the policy, and it is up to the individual schools to choose how they want to handle incoming patrons and payments.

Student board representative Cameron Stewart gave her report to the board. She commented on the success of the high school basketball teams, and commented that she can attest to the issue of vaping in school.

Another problem that Stewart touched on, which came to a surprise to the board members, was some racial discrimination that she has witnessed at the high school. She commented that people are made to go to diversity club meetings, but that most would choose not to go if possible. Abell said that he would look further into the matter.