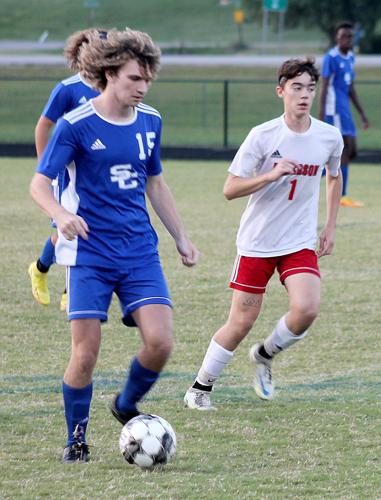 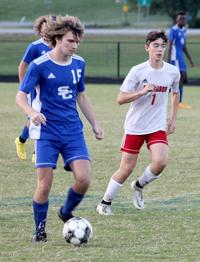 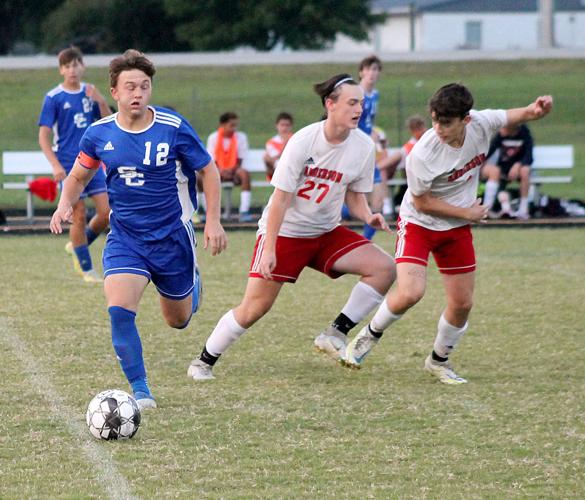 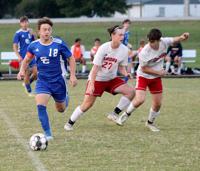 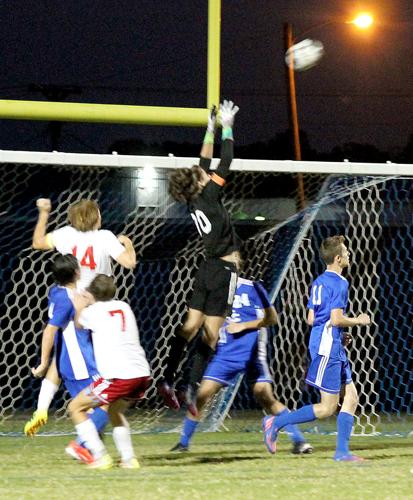 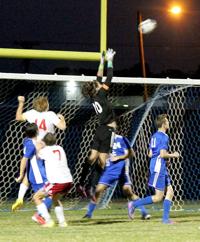 Goalkeeper Thomas Childress makes one of his six saves Thursday in the game vs. Anderson County.

Goalkeeper Thomas Childress makes one of his six saves Thursday in the game vs. Anderson County.

The Bears soccer team get back their momentum during a three game home stretch.

On Sept. 13, the Bears battled Bethlehem at home, and finished the night with a back-and-forth win against the Eagles, with a final score of 2 — 1.

Sophomore Justin Acree, #4, and Senior Nathan Wimsatt, #23, scored the two goals in the game, with Senior Tyler Lester, #12, having one assist.

Junior goalkeeper Thomas Childress, #00, allowed the one goal, but had eight saves in the game.

On Sept. 15, The Bears started the game off hot and never cooled off, shutting out the Bearcats with a final score of 3 — 0. Spencer County applied the pressure throughout the game, more than doubling the attempts at the goal.

Acree was first to get on the scoreboard at the 14:22 mark in the first half. Anderson County did up the pressure, and pushed back at the end of the half, but were unsuccessful in scoring, leaving the score at 1 — 0 at halftime.

The Bears would come back for the second half determined to keep up the momentum, which they did, going toe-to-toe with the Eagles. Lester would make the score 2 — 0 at the 22:11 mark. The best chance Anderson had at scoring was with a penalty kick at the 14:38 mark, but Childress would make a jumping block to keep the Eagles from scoring.

Lester scored his second goal at the 7:53 mark, making the score 3 — 0. The Bears would have another chance to score with a corner kick with 24 seconds left on the clock, but the attempt was blocked by the Eagles’ goalkeeper.

Senior Junior Munoz, #10, and Senior Alexander Aberli, #19, had one assist each, and goalkeeper Childress, had a total of six saves in the game.

On Sept. 17, the story of the Bears vs the Bears game against Butler was defense, with both teams blocking all attempts at the goal, resulting in a 0 — 0 tie game.

Butler was more active at the net, with Childress blocking all 10 attempts. Spencer had three goal attempts of their own, all being blocked by the Bears’ goalkeeper.

The Bears played at Great Crossing vs. Frederick Douglas on Monday as part of the Warhawk Classic. The other two games of the tournament at Great Crossing will be on Thursday vs. Montgomery County at 6 p.m., and a yet-to-be-determined opponent on Saturday. On Sept. 27, the Bears travel to Bullitt East with a kickoff at 5:30 p.m. The last scheduled home game will be vs. Pleasure Ridge Park at 7:30 p.m. on Thursday, Sept. 29.