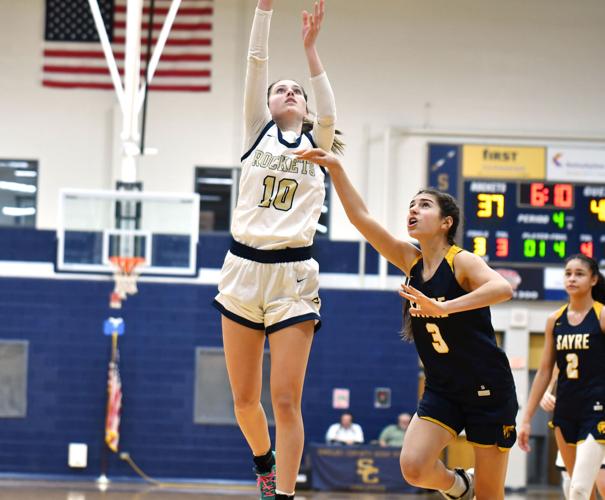 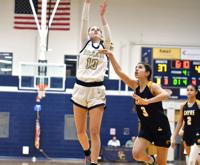 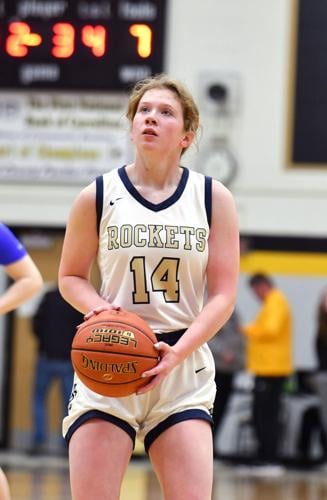 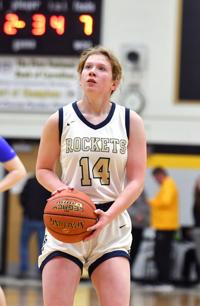 Abby Blanton is part of the second unit for Shelby County who put in a strong performance in Tuesday's win over Western Hills.

Abby Blanton is part of the second unit for Shelby County who put in a strong performance in Tuesday's win over Western Hills.

“We came out of the gate playing really hard. Our defensive intensity was right where we wanted it to be and I think that’s what created a lot of our points there,” head coach Olivia Farmer said. “In the first quarter, we played really well despite some foul trouble we got into. I was pleased with that intensity.”

The Rockets got a boost from Ashlynn Brangers, who played her best game of the year, scoring 18 points — but it was how she got those points that most impressed Farmer.

“It’s the difference between her wanting to be strong and not. She knew she had to be strong and she did that. That’s what she has to do every game,” she said. “I think her problem, and Navaeh (Acklin) is that sometimes they want to get down in the post and expect to get fouled and aren’t always trying to make the shot. Ashlynn was going in strong to make the shot and the foul was just a plus and that’s got to be every game.”

In addition to Brangers’ strong performance, the Rockets also got a big boost from some bench pieces who were forced into a larger role due to early fouls.

“Because of the foul trouble and Amelia Williams being sick last night, we had Abby Blanton, Azana McDuffus and Kassie Moore came off the bench and all of them gave us outstanding minutes, I mean they were just solid,” Farmer said. “All three played their role last night. Kassie was out there getting rebounds; Abby was playing amazing defense and Azana was just out there blocking shots, grabbing rebounds and holding it strong until the guards came down. Extremely proud of those three giving us huge minutes.”

If there was one fault Farmer could find with her team, it’s been a consistent one all year — free throw shooting.

“We were 11-30. We’re a good team and get to the free throw line really well — Jaci (Woods) attacks, Cassie Dale attacks, Ashlynn and Navaeh inside and now Autumn (Simpson) is attacking more — we can get to the line but we have to make those free throws,” she said. “You’d think we never shoot them in practice but we shoot them all the time. We just have to figure out that focus and get those free throws to fall because if we can, we’ll start putting teams further out than we do.”

The Rockets played at Presentation last night after press time, going in with a 7-7 record. Tonight, Shelby hosts Spencer County in a district matchup. Farmer was happy to start the week off with a win with such an important game coming up.

“It starts us off on a good note but we have to keep it going and finish strong. This was the start of a big week,” she said. “We’re one win away from our win total last year. Seeing those improvements makes me so happy as a coach.