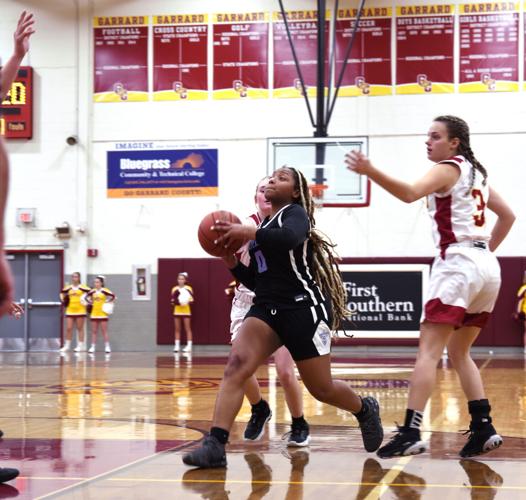 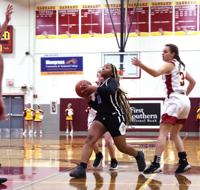 Makyra Beach suffered a knee injury that's kept her out for all of her senior season. She admitted it's been tough, but has learned a lot about herself during the year. 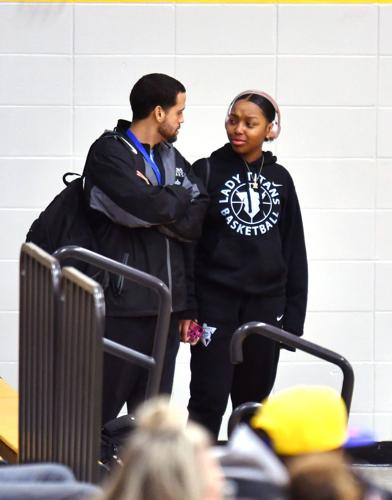 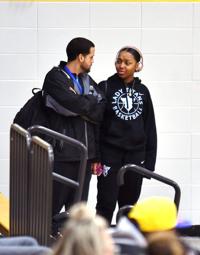 Makyra Beach has taken on something close to a coaching role while she's out with a knee injury this year. Collins head coach Trevor Mason said he's happy to have her around the team to bounce ideas off of and to be a kind of conduit to the players so the message isn't always coming from a member of the coaching staff.

Makyra Beach suffered a knee injury that's kept her out for all of her senior season. She admitted it's been tough, but has learned a lot about herself during the year.

Makyra Beach has taken on something close to a coaching role while she's out with a knee injury this year. Collins head coach Trevor Mason said he's happy to have her around the team to bounce ideas off of and to be a kind of conduit to the players so the message isn't always coming from a member of the coaching staff.

Collins senior Makyra Beach didn’t know it at the time, but the buzzer-beater loss to Shelby County in the district tournament last year was the last time she’d don the Colombia and black in a game.

Suffering a season-ending ACL injury before the year even began shook the point guard’s confidence, but in losing her senior year, she gained a lot more.

“Mental toughness — that’s the biggest thing,” she said. “From the time I’ve had surgery until now, it’s been do I want to push myself to be back on the court or am I going to give up? Am I going to be a leader for my team who’s still looking up to me? I’ve questioned myself a lot.”

Now, Beach has transitioned from the proverbial “coach on the floor” to what is essentially another coach. That’s something that new Collins’ head coach Trevor Mason isn’t taking for granted, even if he’d rather have her as the coach on the floor.

“You can’t teach senior leadership,” he said. “When you’re a senior and at the point guard position and the leading scorer, losing that is a detriment to the team. At the same time, she’s been very beneficial in the locker room for us, on the bench and on the bus rides to the games.

“It’s just a testament to her ability to overcome adversity and being able to keep moving forward. Life isn’t going to stop. Basketball isn’t going to stop,” he continued. “Those girls need her mind and her wisdom from the last four years playing. When she’s here, all the players look to her, listen to her. We get the benefit of being a new staff to hear that leadership from a person who’s been here the last four years and her painting the landscape of what’s happened and how they’ve improved from last year to this year. You need someone like that around and she’s someone you can pick her brain and see what she sees outside of the coaching staff.”

As much as Beach has helped Mason as he gets settled in as the new Titans’ coach, he’s helped her just as much.

As a senior in high school, Mason — a point guard himself — tore his ACL but was still able to go on and play in college, first at Ozark Christian College before finishing his career at Boyce College.

“It gives me hope. He tells me I need to be in the gym working if I want to be back on the floor,” Beach said. “He gives me a lot of hope because he recovered within like four months. He makes me believe I can do it in six.”

“I’ve told her that if she just continues to work hard and push herself through the physical therapy, there’s a spot for her at the next level,” Mason said. “I’m a living testimony of that given that I was able to play at the next level despite my two ACL tears.”

Beach said losing the game for her senior year has just reinvigorated her desire to play at the next level.

“At first, I thought it was just I’m a good academic student so I’ll just go to college for that. My dad says if I don’t go and play, it’s almost a waste of talent which I don’t want to do,” she said. “And I really want to touch a basketball court again. So it has pushed me to want to go and play in college.”

Mason said he wants to build a “player-led” program at Collins and called Beach “the epitome of that.” He also praised the senior for not always agreeing with him when he comes to her with ideas, calling it refreshing.

Beach said, once she realized she wouldn’t be playing her senior year, that there was “a lot of emotion.” She admitted that it was frustrating at first to have to watch her teammates carry on without her, but said she’s “matured a lot” throughout the process.

“It was challenging at first, but coach told me to look at it from the perspective I’m in right now. We’re still a young team — I’m the only senior — so I’ve still got to help them, tell them what I see and tell them to get through it,” she said. “I didn’t expect to get hurt but my senior year got taken away from me. They’re still on the court so I tell them to show everybody what we can do.”

Perhaps the most surprising thing Beach has learned through the process is that she might enjoy the whole coaching thing a bit. One thing is for sure, though, she’s going to be a Titan for life.