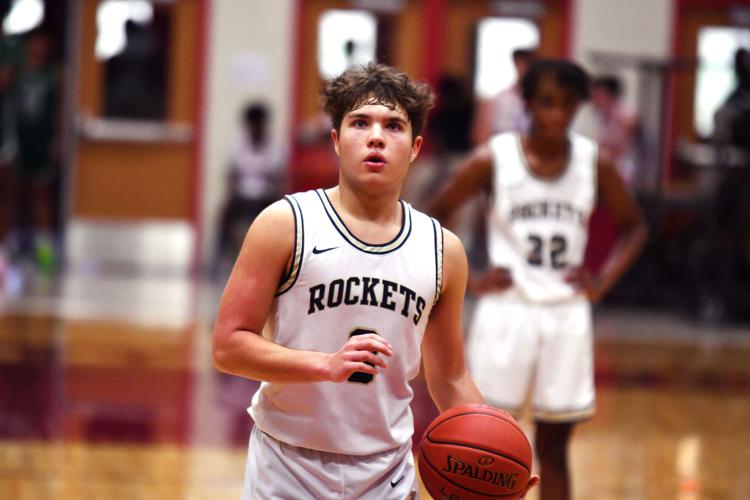 Dillon Ritchey takes a deep breath before a clutch free throw in the fourth quarter of Shelby County's win over Bullitt East. Ritchey sank six free throws -- three to tie the game at 50 and three to win it 55-54. 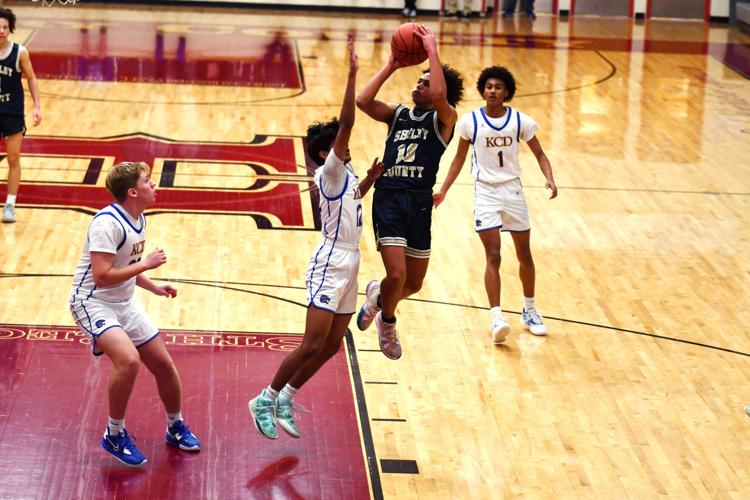 Javon Hunter had a strong showing in the last two games of 2022 for Shelby County. The freshman stepped up for a shorthanded Rockets team, scoring 15 points in the win over Kentucky Country Day. 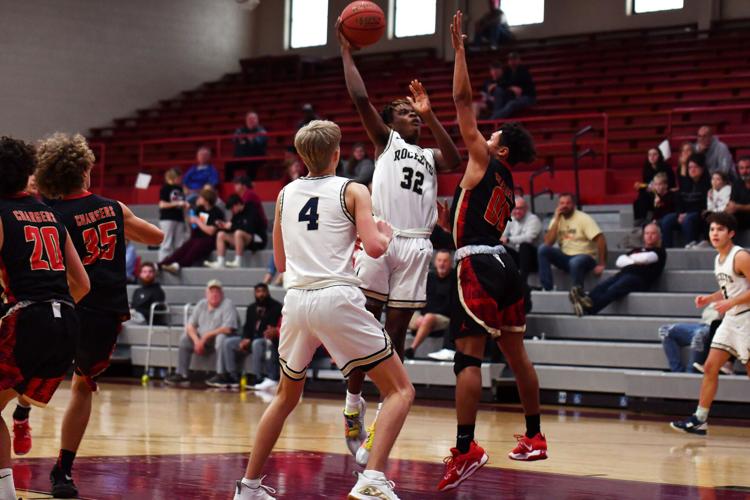 Joel Thompson stepped up for a shorthanded Shelby County team in its last two wins of 2022. His ability to defend the low post frees up Dallas Mercer (4) to guard longer perimeter players.

Dillon Ritchey takes a deep breath before a clutch free throw in the fourth quarter of Shelby County's win over Bullitt East. Ritchey sank six free throws -- three to tie the game at 50 and three to win it 55-54.

Javon Hunter had a strong showing in the last two games of 2022 for Shelby County. The freshman stepped up for a shorthanded Rockets team, scoring 15 points in the win over Kentucky Country Day.

Joel Thompson stepped up for a shorthanded Shelby County team in its last two wins of 2022. His ability to defend the low post frees up Dallas Mercer (4) to guard longer perimeter players.

After a loss to Frankfort in the first round of the Henry County Invitational Tournament, Shelby County boys’ basketball coach Blake Traylor said the next two games were going to show what his team was made of.

The Rockets answered that challenge with a convincing 73-60 win over Kentucky Country Day the next day and a gritty 55-54 win over Bullitt East to close out 2022 on a high note and their first two-game winning streak of the year.

“Feel a lot better. We had that streak where it was just win-loss-win-loss and we’ve finally won two in a row,” Traylor said after the Bullitt East win.

After Shelby let the lead slip away against the Chargers, Dillon Ritchey was twice fouled on three point attempts and knocked down all six free throws — the first set of three to tie the game at 50 and the final three to give the Rockets the win.

After Ritchey hit the first free throw with less than half a second on the clock, Bullitt East called a timeout to try to ice him. Traylor said nobody in the huddle had any doubts about the outcome of the next two attempts.

“I was just giving them scenarios. I was saying ‘When Dillon makes this second free throw, pull everyone off the line except for Dallas because he’s covering the ball to block the pass and when it makes the third one, make them catch it going the other way,’” he said. “There wasn’t any doubt from anybody that he was making both of those free throws.”

One person in the huddle, however, didn’t hear any of those scenarios.

“To be honest, I wasn’t really listening to coach,” Ritchey said about his mindset during the timeout. “I was just telling myself that it’s going to go in over and over. I just had to believe it.”

It worked out as Ritchey calmly drilled the second free throw to tie the game and, with a little bit of pressure taken off, knocked down the go-ahead free throw and held his follow through just a little bit longer than normal after the ball went through the net.

Ritchey had been shooting 65 percent from the line heading into the Henry County tournament after a team-high 86 percent mark last year among players with more than two attempts. Just like there was no doubt in Traylor’s mind that Ritchey would go 6-6 down the stretch, he also had no doubts that his cold shooting would continue into 2023.

“It was always an aberration with him. He shot 86% last year from the line. We knew his stroke was always there,” Traylor said. “The best thing about him is that he’s never lost confidence and we haven’t lost confidence in him either. He’s in a good frame of mind right now and there’s never going to be any doubt where we’re questioning his shot.”

Ritchey said it came down to simply staying focused at the line.

“The free throws I was missing it was just me not being focused. Once I got focused and locked in, I was sure they were going in.”

What makes the last two wins for the Rockets more impressive is that it was done without leading scorer O’mauri Downs, who was out of the lineup for the last two games of the month. Without that primary scorer to rely on, the Rockets got strong performances out of some younger guys.

“Without him, everybody was making plays for each other and everybody was confident,” Traylor said. “Javon (Hunter) was so confident — he had 15 points yesterday and one of the biggest shots today when he caught it in the middle and made that shot at the free throw line.”

Sophomore Joel Thompson, who showed flashes early in the season, especially against North Oldham when he was the only Rocket in double-digits, came up big on defense and rebounding to close out 2022 which could make Shelby a more dynamic team as the calendar flips over.

“He’s getting better every day. He’s more physical down low than anybody else that we’ve got,” Traylor said. “He helps our length tremendously because if he’s in the middle down low guarding a big guy, it frees up Dallas (Mercer) on the floor and so now we’ve got more length on the court.”

But ultimately, Traylor was happy with what he saw from his team following a tough loss against Frankfort. He challenged his players and they responded with exactly what he wanted to see.

“They showed a lot. We’ve been a great team the last couple of days. We had some good individual performances early in the year, but we’ve really just been a great team this week. Everybody was playing really well together, especially on the defensive end. Our defense was so much better the last two days than it was in the Frankfort game or even some of the games we’d won leading up to this,” he said. “One of the biggest things the last two days is how good we’ve been in the fourth quarter. (Against KCD), it was close to a tie game at the end of the third quarter and we were up 22 before we subbed our starters out. Today, obviously we had a lead and had some issues and gave them the lead. Coach (Rob) Burton said it in the hallway — one thing he loves most about this time is that when things are tight and tense, we’re just calm. They showed a lot of toughness.”

As if you were thinking the Rockets weren’t having fun heading into 2023, they all ran off the floor yelling “party in the locker room” after horn sounded on their win over Bullitt East.

“It was wild. We always party after games, but it’s obviously easier after a win,” Ritchey said with a big smile.