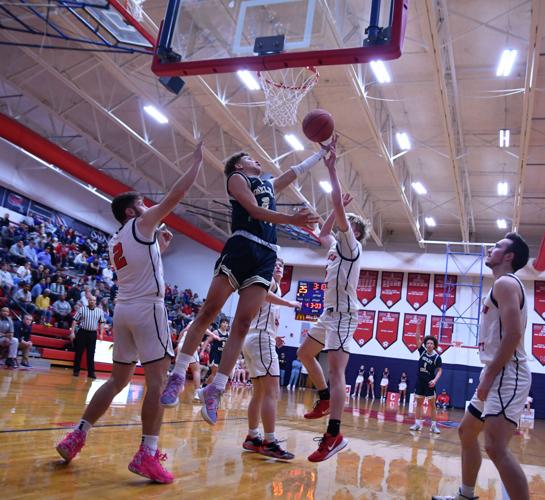 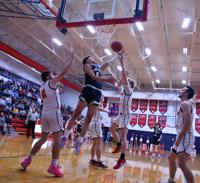 O'mauri Downs pulls off a reverse layup against Anderson County on Friday. 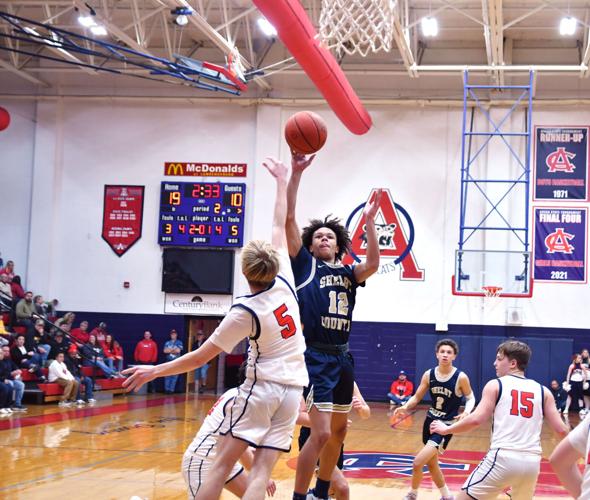 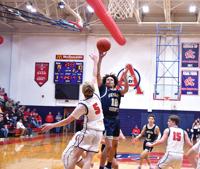 Michael Jones goes for a floater in the lane against Anderson County.

O'mauri Downs pulls off a reverse layup against Anderson County on Friday.

Michael Jones goes for a floater in the lane against Anderson County.

The Shelby County boys’ basketball team followed its tough 48-39 loss at Anderson County on Friday with a 67-47 palate-cleansing win at Carroll County on Saturday.

“We definitely shot the ball a little bit better (Saturday). You have to give some of that to (Anderson County coach Bryan) Hyatt for scouting us like crazy like every district opponent is going to do. They took Dillon (Ritchey) away and made it hard on a few guys,” SCHS head coach Blake Traylor said Monday. “Carroll County played differently – played zone and that allowed Dillon to get freed up and he had 28 points. He took a little frustration of not getting too many touches on Friday out on Saturday and put the ball in the basket really well.

“We started out a little slow. We were trying to speed the game up and did that for a lot of the first half. We just really locked them down in the second half and it opened our offense up, too.”

In Friday’s district opener, the Rockets were doomed by an uncharacteristically bad shooting night from everyone. As a team, Shelby shot 29 percent from the field and 12.5 percent from beyond the arc with O’Mauri Downs’ 43 percent shooting from the field being the best on the team for the game.

“Yeah, we didn’t hit any shots. I can’t wait to get the stats back from Hudl and see our shooting percentage because it was not good. I thought we got good shots, it was just a night where they didn’t go in,” Traylor said. “We played really hard, but it was ugly. I think if we hit a couple of shots in the first quarter — we missed a couple of layups, had some turnovers and missed a couple of wide open threes. I think if we hit those, the game would have kind of opened up for them. But it was ugly on our part. Our shooting was just not good.”

Against a team like Anderson County — which likes to play a deliberate pace — every possession counts and the Rockets weren’t able to get as many offensive rebounds as Traylor would’ve liked, leading to too many empty possessions.

“We rebounded okay tonight. It wasn’t terrible on the defensive end,” he said. “We just didn’t get any second chance opportunities on offense. That’s something we talked about and it just kind of never came to fruition.”

In the second half, the Rockets were able to close the gap, getting the lead to under five at one point, but weren’t ever able to catch the Bearcats.

“We just never could quite get over the hump. I thought we were going to start getting to the foul line more than we did. We got in the bonus in the third quarter and somehow, we just never really got to the line in the fourth,” Traylor said. “We got a bunch of calls on them early and then the calls just kind of flipped. We were trying to attack, attack, attack and we were and then it just kind of stopped happened.”

The Rockets didn’t have long to lick their wounds, however, as they quickly turned around for a trip north the next day and returned home with a 20-point win.

“It was a big sign of maturity when you have a big emotional game like Anderson County, district rival, the night before and you lose a tough one; to be able to come back the next day and put it in the rear view, move on and play a game like that,” Traylor said.

Traylor has never had to question his team’s toughness this year and the reason why may come from the unusual circumstances around their practices during construction taking place on the school.

“One thing about this group is they’re pretty resilient. Things may not go our way all the time — whether that’s on the court or other areas of life. But they’re able to really bounce back and keep moving,” he said. “That can be seen in some of our practice conditions with drills going off, things being sawed off the railings or we have a cloud of dust in here at points. We’ve kind of learned to deal with adversity and moving through things.

“If we could somehow schedule some games during construction time, I think we’d be in good shape,” he added with a laugh.

The Rockets were in Meade County on Tuesday, after press time and play host to Spencer County on Friday.