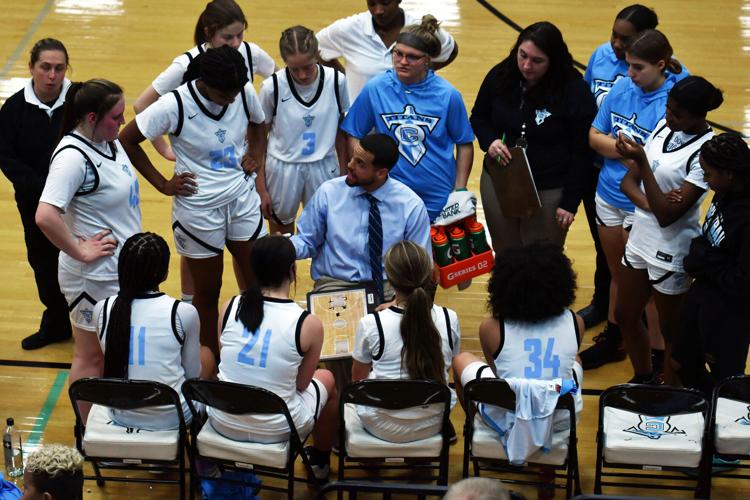 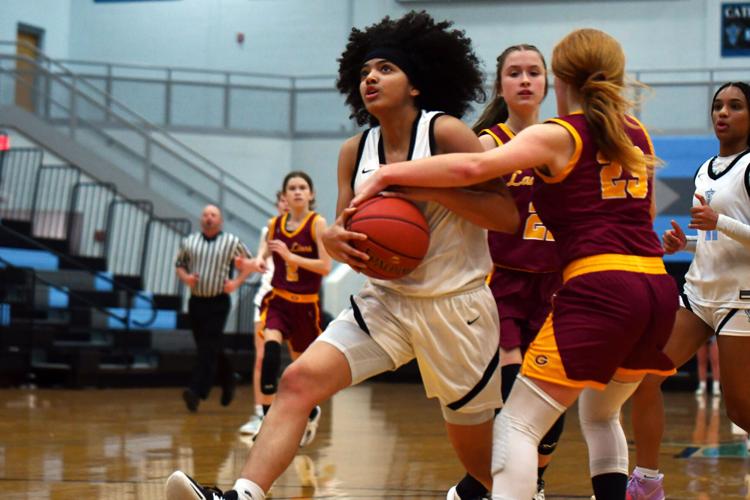 Laniyah Dunn led the Titans with 18 points and her nine rebounds ranked second in the season-opening win over Garrard County. 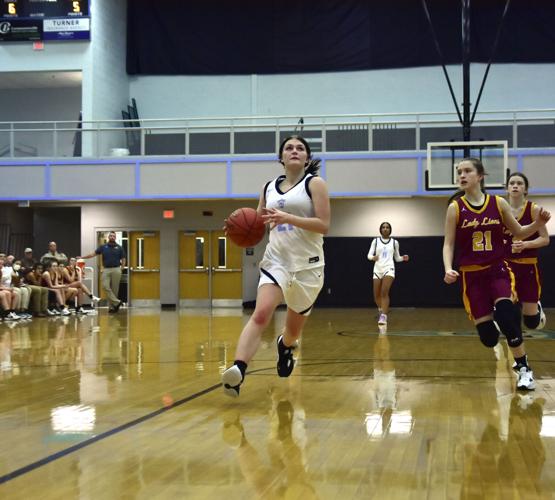 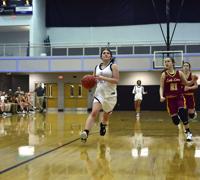 Addison Hughes established herself as a leading candidate for the point guard position for the Titans with stellar play in Tuesday's win. 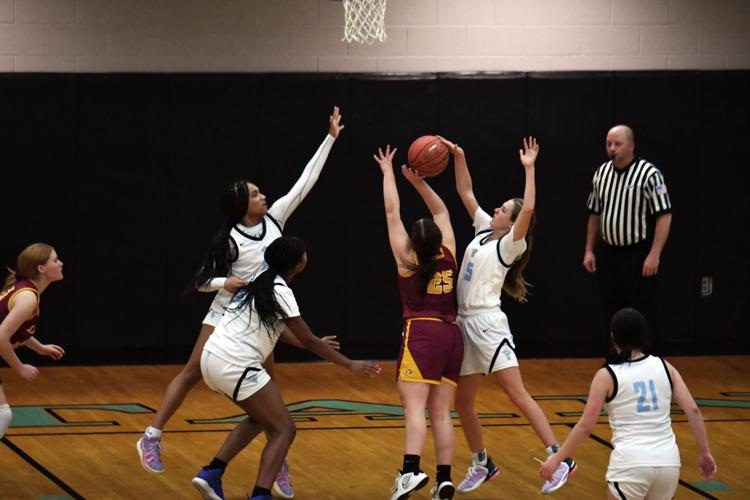 Emma Kendall (5) had seven points, five rebounds and a pair of blocks to help spark the Titans' defense. 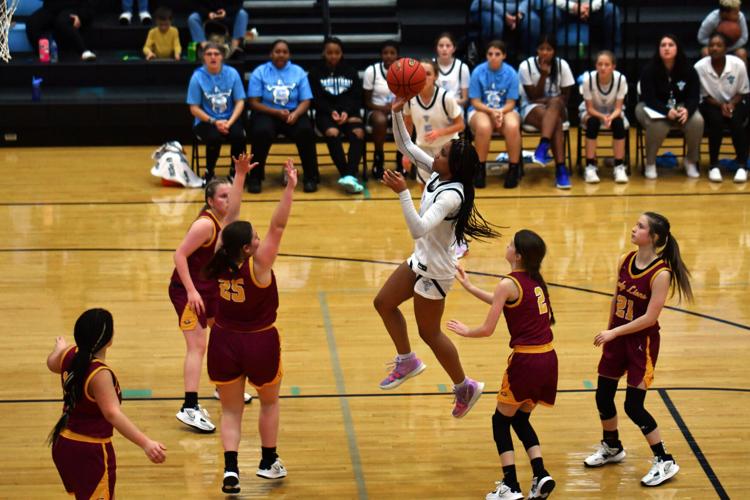 Danielle Jones' 10 points and eight rebounds were third for Collins in both categories, but her impact on the game, head coach Trevor Mason said, goes beyond the stat sheet.

Laniyah Dunn led the Titans with 18 points and her nine rebounds ranked second in the season-opening win over Garrard County.

Addison Hughes established herself as a leading candidate for the point guard position for the Titans with stellar play in Tuesday's win.

Emma Kendall (5) had seven points, five rebounds and a pair of blocks to help spark the Titans' defense.

Danielle Jones' 10 points and eight rebounds were third for Collins in both categories, but her impact on the game, head coach Trevor Mason said, goes beyond the stat sheet.

In the season opener last year, the Collins girls’ basketball team traveled to Garrard County and returned home with a 77-39 loss. It was the start of a six-game losing streak.

This year’s Titans have already exorcised that ghost from last year, starting the year with a 58-39 win over those very same Golden Lions in head coach Trevor Mason’s debut with the team.

“It’s always good to get that first win of the season. You come in as a new coach, new staff, new atmosphere and the girls played the first half with a lot of nerves,” he said, soaked with a combination of sweat and a celebratory water-bottle shower. “I think as the game went on, the nerves were gone and we started playing Lady Titan basketball.

Both teams struggled to find the basket early, but then exchanged a series of runs. With 2:20 left in the first half, the Titans found themselves down by a point; but just over a minute later, they were up by four before the half ended.

“We went man and then we switched back to our match-up zone and I think that confused Garrard County a little bit,” Mason said about the run. “That’s when we got those stops on defense — it wasn’t the points that mattered, it was the stops. We got some easy buckets and that took off with the momentum.”

The biggest question mark for Collins entering the year was the point guard position after returning starter Makyra Beach suffered a season-ending injury. Mason had planned on using a committee, led by Danielle Jones and Laura Vidourek, to fill that vacancy, but Addison Hughes may have locked the role up after Tuesday’s win.

Hughes’ 11 points was second on the team behind Laniyah Dunn’s 18, but the sophomore shot 5-9 from the field to do so and was even more efficient in transition finding the open player.

“She hasn’t been around as consistently as I’d want her to so we sat her out the first quarter. I told her that I hoped she understood how important she is in filling the shoes at the point spot,” Mason said. “She brings defense, unselfishness and now it’s just about getting her in practice and getting her understanding the system.

The 5-foot-5 sophomore had seven points, five rebounds and a couple of blocks for the Titans. For her toughness on defense, Mason gives credit to George Sanderlin and the cross country program.

“She’s just a tough player and plays so hard. She brings so much to the table. Credit to cross country. When you’re running a 3.1-mile race at almost a dead sprint, it does something to you mentally,” he said. “I think that’s where she comes in with that mental edge and dominates on the defensive end.”

Jones finished with 10 points and eight rebounds and didn’t have the most efficient night shooting, going 4-19 from the field. But even when the shots aren’t falling, Mason knows how much the tall sophomore brings to the table.

“She didn’t hit as many shots tonight as she’d have liked but just her presence on the floor and her in that position helps us all around,” he said. “Her ability to get to the paint, sucks the defense in and then kick it out. Even if we don’t hit it, we’re getting good looks.”

In addition to being the leading scorer, Dunn finished with nine rebounds, good for second on the team behind Amber Barnett’s incredible 17. The Titans had a team-total of 52 boards; led by Barnett, Dunn and Jones and Chamber’s six.

It was easy to see the excitement for the Collins girls’ team late in the game, as the student section started chanting that the game was over early in the fourth quarter, but Mason said he didn’t allow himself to relax until there were two minutes left.

“I’ve seen games flip and switch. I told them in that first half that it’s a game of runs,” he said. “They went on a run and now it’s our turn to go on a run. You’ve got to withstand their run and the adversity that comes with it and just keep hammering at that wall.”

While the excitement in the bleachers was palpable, it didn’t compare to the excitement of the players when the clock struck zero on their first win of the year.

“It doesn’t matter how much you praise them in practice or after a scrimmage, that first win — especially when it’s the first game of the season — you hope it sets the tone for the remainder of the year,” Mason said. “It’s so important to get that win and get that momentum and confidence going.”

The Titans took on Carroll County Thursday, after press time and are off until Dec. 6 when they open the district schedule against Anderson County, kick-starting a stretch of three straight district games.