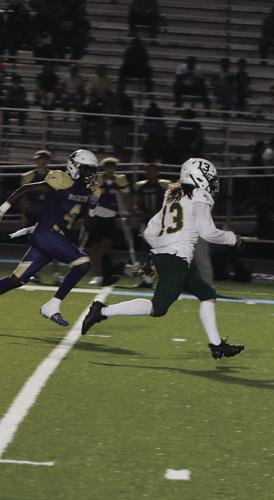 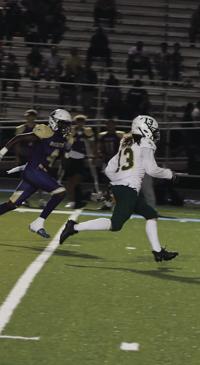 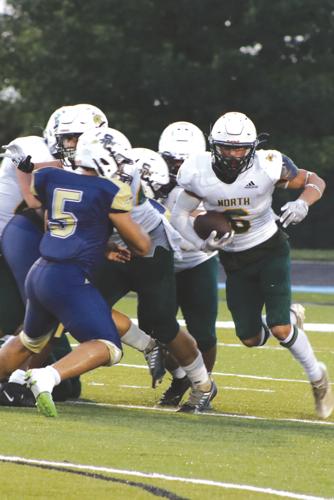 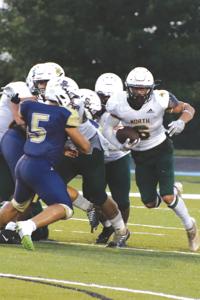 Ryan Priest runs up the middle for some tough yards

Ryan Priest runs up the middle for some tough yards

SHELBYVILLE – In life, there is a “bill” to pay to be successful.

That is no different on the football field.

Each week, North Bullitt head coach Cain Sams is seeing a little more money being “deposited” into the bank but his Eagles ran a little short on cash Friday evening.

Getting behind 24-0 by halftime, Sams liked the fight but North Bullitt suffered its fourth straight loss on the season.

The homestanding Shelby County Rockets were rewarded with a 38-7 victory on Friday night.

“I’m proud,” Sams said of his team. “It would have been real easy for the team to fold up shop. But we didn’t. We continued to work hard.”

With a team with just four seniors, Sams said there is a lot of teaching and learning that happens. Paying the price of hard work has to start after school on Monday and continue through the end of the game on Friday night.

Sams is feeling progress is being made but the price for success takes a lot of effort.

“We’re a young team but we have to be ready to play when we take the field,” Sams said of consecutive games that the Eagles got down early. “That is the responsibility of myself and the other coaches. We have to have them ready to play.”

At halftime, Sams said he challenged the offensive line and the entire defensive unit for better focus after intermission. He was pleased that they responded.

Playing at Collins High School as the Shelby County field is under renovation, the host team took the opening kickoff and ran 11 plays before quarterback Javon Hunter found Landon Ford open on a 10-yard touchdown toss.

Tucker Swindler converted the extra point with 8:16 left in the opening quarter for the 7-0 Rocket lead.

When its opening drive stalled, Sams called for the fake punt. However, Garrett Durbin’s pass to Evan Ernspiker fell incomplete.

Starting at the Eagle 34, Gianni Hunter capped off the four-play drive with a 5-yard touchdown. Swindler’s extra point made it 14-0 with 7:55 to go.

On its third drive, Shelby County would stretch the lead to 17-0 when Swindler kicked a 28-yard field goal with 6:09 before halftime.

For the Eagles, the best offense in the first half came from Justin Eskridge, who returned a kickoff 60 yards in the second quarter. However, that drive would stall at the Rocket 27.

Mixing the run and pass, Shelby County went 73 yards in eight plays. Even though the home team was slowed by two penalties, Javon Hunter kept the ball and got outside the containment for the 23-yard touchdown with just 27 remaining before intermission.

The teams went into the halftime break with Shelby County ahead 24-0 after Swindler’s extra point.

For a second straight week, whatever Sams and his coaches had to say at halftime worked.

After Eskridge’s second big kickoff return – this one for 54 yards – North Bullitt started at the Rocket 42.

Ernspiker had the big run of 17 on the drive. North Bullitt had first and goal at the 9. Durbin hit Ryan Priest to get the ball to the 3. After Durbin’s sneak was stopped a foot short. On fourth down, the ball was fumbled into the end zone with Shelby County recovering.

The North Bullitt defense held and forced the first punt of the game.

Durbin opened the drive with a 25-yard completion to Tanner Higdon but the Eagles would punt.

Once again, the defense rose up as Avery Kelly intercepted a Hunter pass at midfield. But Durbin would be intercepted by Adavion Dale three plays later.

Higdon would return the favor when he intercepted a pass at the Rocket 48.

The offense could not capitalize thanks in part to a holding call and an intentional grounding penalty.

Shelby County would finally hit the end zone with 8:11 left in the game. Dylan Maynes was trapped but reversed field for a 24-yard touchdown. Swindler’s extra point made it 31-0.

The visitors would put seven points on its side of the scoreboard.

When Matt Gathof recovered the onside kick, North Bullitt started at the Rocket 47.

Durbin went to the air to hit Priest with a nine-yard pass and then would find Kelly for a 19-yard completion.

With first and goal at the 5, Ernspiker carried twice. After an illegal procedure call, Durbin found Priest open in the end zone for an 11-yard touchdown with 3:46 left in the game. Ernspiker’s kick made it 31-7.

Shelby County would tack on a late touchdown when Javon Hunter kept the ball for a 23-yard score.

NEXT GAME – North Bullitt goes in search of its first win of the season on Friday night when the Eagles travel to Eastern High School in Middletown. Kickoff will be at 7:30 p.m.