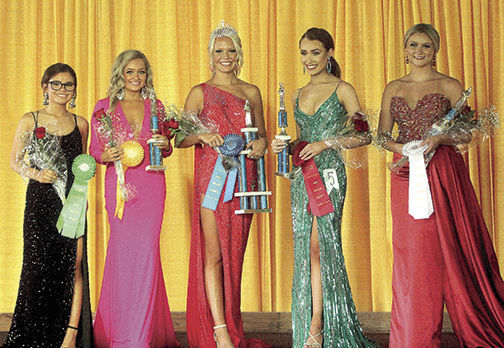 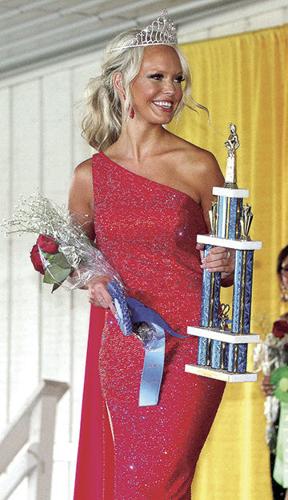 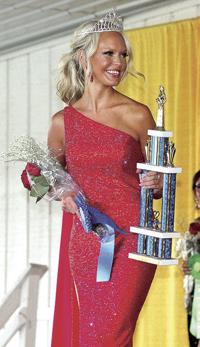 CLERMONT – Kennedy Haven Riley wanted to win, but even as the names of the runners-up were being called on Monday at the Miss Bullitt County Fair pageant and the possible winner’s pool got smaller, the 18-year-old did not think she was going to win.

Finally, after four runners-up had their names called, Riley was the one whose name was called last, leaving her to be crowned as the Queen of the Fair in 2022.

Riley, a recent graduate of Grant County High School, had only been to Bullitt County once before, to visit Bernheim Forest. However, she had friends who had competed in the Miss Bullitt County Fair contest before and she had heard good things.

This year’s pageant had seven competitors.

Riley has already won a Miss Grant County Fair pageant so she is prepared for what it take this winter to make a strong showing in the statewide competition for all of the winners from around the state in county fair events.

The day started with Riley thinking about winning.

“I was thinking winning,” she said after the win under the pavilion on a hot night. “I’m a pretty competitive person for sure.”

But as the names started being called from the fourth runner-up down to the winner, Riley wasn’t quite so sure her name would be the last to be called.

“I thought Ava Tucker or Reagan Earlywine was going to win,” Riley admitted of the first and second runners-up, respectively. “I knew them before this event.”

Before the official competition began at 7 p.m. on Monday, Riley and the other six contestants had to meet with the judges one-on-one. That part of the contest has tripped up other girls in the past.

“It was (tough),” she admitted. “I didn’t feel real confident after that.”

But things went well during the swimsuit portion of the process in front of a small crowd as she walked the runway. After a change of clothing, the contestants returned to the runway in evening wear. Riley, who has competed in a number of beauty contests, borrowed the dress she wore on Monday from a friend from another event.

The daughter of Andrea and T.J. Riley didn’t register for the Miss Bullitt County Fair event until Thursday night. It was more like Saturday night before she decided to make a big push to win the title. The idea to make the two-hour trip to Bullitt County came from Jenna Webster, last year’s winner, who is a friend.

“One of my good friends won it last year,” Riley said. “I thought she would be here tonight but she went to CMA Fest.”

Riley hasn’t quite decided on her future after high school. She is working this summer in a salon and she also babysits. Those jobs might limit her nights at the Bullitt County Fair this week, but she wants to make the trip several times to take in other events.

The first runner-up on Monday was Ava Tucker, the 19-year-old daughter of Dude and Larissa Tucker. She is a student at Thomas More University with a 4.0 GPA while majoring in Biology.

The second runner-up was Reagan Earlywine, a 20-year-old University of Louisville student from Paris, Ky., who is the daughter of Todd and Angela Earlywine. Earlywine, like Tucker, is a member of her school’s dance team. She is working toward a biology degree and wants to be a dentist.

Finishing as the third runner-up was Haley Case, who is from Spencer County. She is the daughter of Herman Case.

The fourth runner-up was Layla Baker, a 15-year-old at Bullitt Central High School who was moving up after being the 2021 Teen Miss Bullitt County Fair winner. She is the daughter of Rachall and Matt Simmons and Angela and JR Baker.