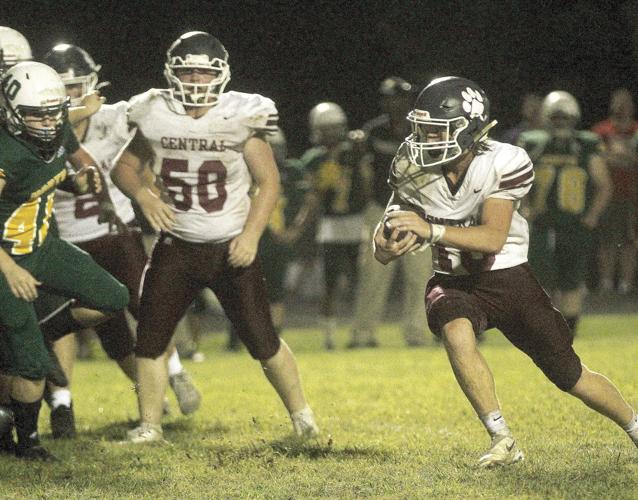 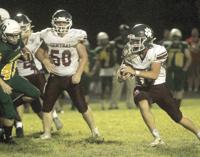 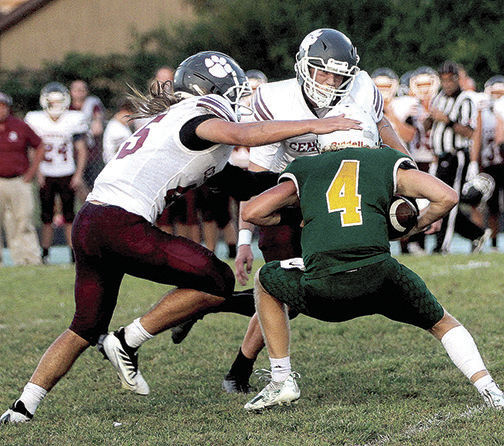 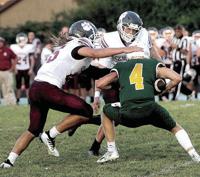 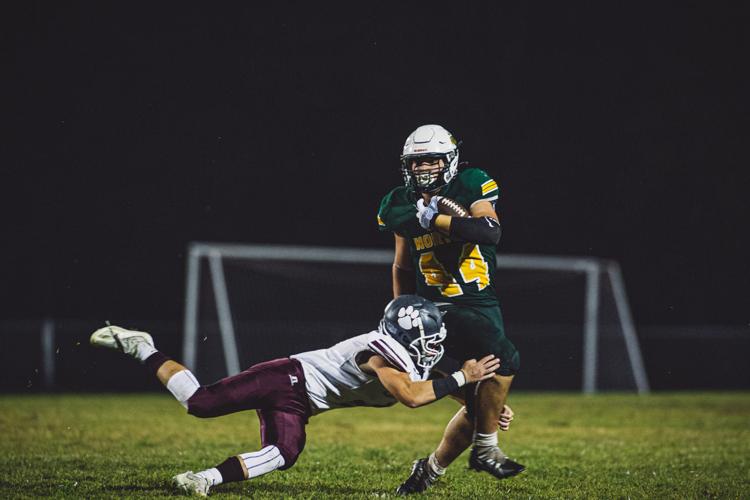 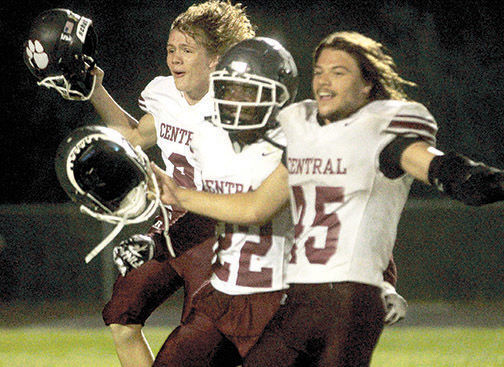 The Game Celebration -- Bullitt Central players celebrate after securing a 21-20 win over North Bullitt on Friday in The Game. 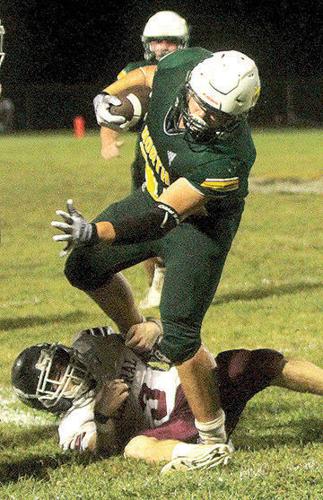 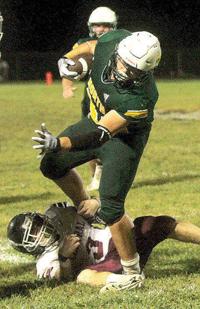 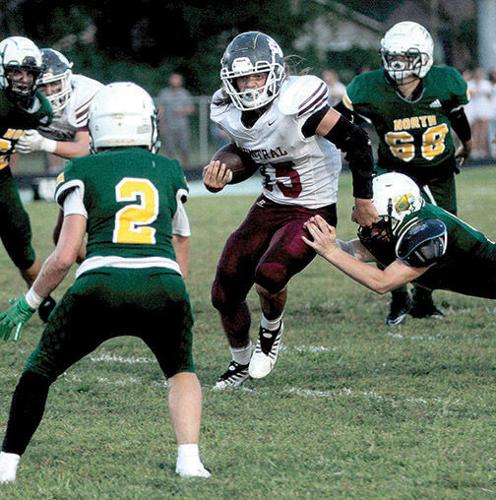 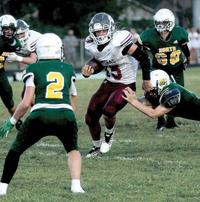 Into the Secondary -- Bullitt Central senior running back Gary Settle breaks into the Eagle secondary on Friday. Settle had 14 carries for the Cougars for 55 yards and also had six tackles as he played on both sides of the ball in The Game.

The Game Celebration -- Bullitt Central players celebrate after securing a 21-20 win over North Bullitt on Friday in The Game.

Into the Secondary -- Bullitt Central senior running back Gary Settle breaks into the Eagle secondary on Friday. Settle had 14 carries for the Cougars for 55 yards and also had six tackles as he played on both sides of the ball in The Game.

HEBRON ESTATES – After three weeks of dismal football, Bullitt Central and North Bullitt put on a memorable show Friday in the 47th renewal of The Game, the oldest gridiron rivalry in the county.

Bullitt Central led 21-6 two plays into the fourth quarter, but North Bullitt, a team that had failed to score over the first three games of the season, scored twice in less than six minutes with the help of an on-sides kick. After pulling within 21-20, the Eagles recovered another on-sides kick.

Twice over the final 6:50 of the game, North Bullitt got inside the Bullitt Central 25-yard line only to be turned back. With 4:02 remaining in the game, Bullitt Central sacked Eagle quarterback Garrett Durbin at the 30-yard line on fourth down. After the Cougars failed to get a first down at their own 39-yard line, the Eagles had 1:48 remaining in the game.

Following a sack on first down, Durbin scrambled for 14 yards, getting out of bounds as neither team had a timeout remaining. The quarterback then connected with senior wide receiver Jasper Fetter over the middle for 18 yards to the Cougar 15-yard line.

But that was as far as the Eagles would go. Three incomplete passes set up a fourth down. After a delay of game penalty on the Eagles, Durbin’s pass over the middle sailed long out of the end zone and Bullitt Central had its 21-20 victory.

The win was the second in a row for the Cougars in the series, coming on the heels of last season’s thrilling 42-38 Bullitt Central win in Shepherdsville. The maroon and gray now lead the rivalry by a 27-20 count.

The victory by the Cougars also set up a winner-take-all match on Friday against Bullitt East for the Bullitt Cup. The annual award goes to the top football team in the county. Bullitt East is the holder of the traveling trophy. The award is presented by Schmid Funeral Home and is also sponsored by The Awards Center, The Billings family and The Pioneer News.

After the poor start both teams had gone through over the first three weeks of the season, this was a definite step in the right direction for each. While there were plenty of errors and miscues, both teams put forth a strong effort. The rivalry brought out the best performance of the season for both teams and provided a platform for future development.

Following the game, Bullitt Central senior Blake Pedley said there was more trust and less worry when North Bullitt made the big final push. Pedley was on the field for every play in the game except his own team’s kick-offs.

“I trusted my teammates,” the senior said when asked about any fourth quarter worries. “I knew they would pull together. I’ve seen that fight before.”

Bullitt Central’s game plan was to keep the ball on the ground and win the line of scrimmage.

“It was just hard-nosed football,” Pedley explained. “We wanted to make them quit. But they didn’t quit.”

That fact that the Eagles did not quit in the second half when they were twice down by double-digit counts, was not unexpected and a promising precursor for the rest of the season, according to head coach Cain Sams.

“I’m happy with the way the kids handled adversity,” the first-year coach said. “It was 21-6 and we were losing at halftime. Bullitt Central had the momentum at halftime. The talk then was to keep fighting and playing.

“No loss is a good loss,” Sams continued. “Every loss is a bad loss. But when you lose but don’t quit, that shows growth. It’s tough to handle adversity.”

Pedley scored two of the three touchdowns for the Cougars. One of those was the only score of the first half, when the senior capped a 36-yard drive after a short punt with a 4-yard run.

The only pass in the drive for the Cougars was a 14-yard completion for a first down when junior Isaiah Tobin connected with Travon Miller. Bullitt Central senior Gary Settle carried the ball on the next three plays for 10 yards, setting up the touchdown by Pedley on his only carry of the drive.

What would turn out to be a very important part of the game followed when Cougar kicker Peyton Whitsett connected on the extra point.

That 7-0 score held up until halftime.

The first half was just the tip of the iceberg for the excitement coming after intermission.

North Bullitt got the ball to start the second half, but had to punt without getting a first down. Bullitt Central went the other way, using eight plays to cover 59 yards. The big play was a 38-yard pass down the middle of the field from Tobin to Miller that put the ball on the 15-yard line.

Settle ran twice to the one-yard line before quarterback Michael Anderson, who was switching in and out with Tobin, powered the ball across the goal line.

After going the first 14 quarters of the season without a touchdown, the Eagles could have folded at this point. Instead, the Eagles went big.

Starting at their own 31-yard line, sophomore running back Evan Ernspiker ran for 14 yards and then the ball was moved to midfield by an illegal substitution penalty on the Cougars. After a short run by Ernspiker, Durbin dropped back and threw a 30-yard connection that senior Justin Eskridge caught in stride, finishing the 48-yard touchdown.

The extra point kick was blocked.

Bullitt Central’s only turnover of the game came two plays into the next drive on a fumble. However, the Eagles could not move the ball and when Durbin tried to scramble on fourth down, he was well short of the first down.

Bullitt Central had to go only 43 yards after the stop. A 16-yard pass from Anderson to senior Jason White moved the ball to the 14-yard line. Pedley had a pair of 3-yard runs and on the second play of the final frame, the senior went left and then cut up field for an 8-yard touchdown run.

Most of the large crowd probably thought the game was over at this point with the Cougars up 21-6 and the Eagles having trouble scoring this season.

The fans were wrong.

North Bullitt moved right down the field like they had been doing it all season. Durbin and Ernspiker connected for 10-yards on first down and Bullitt Central helped out with a 15-yard roughing the passer call, the first of three in the fourth quarter.

The Eagles went for two points after the score and the first attempt was an incomplete pass, but the Cougars were whistled for a late hit again. Durbin had to leave the field with a minor injury on the play, leaving the Eagles to try a direct snap play to Ernspiker that failed.

On the touchdown pass, Durbin had been roughed and that penalty would be implemented on the kick-off. Oddly, that penalty was enforced after the late hit penalty on the first extra point attempt.

Now with new life and kicking from Bullitt Central’s side of the field, the Eagles attempted an on-sides kick that Bullitt Central handled poorly and North Bullitt recovered at the 33-yard line.

On the second play of the drive, Durbin connected with Fetter for 13 yards. On the next play, Durbin hit Priest at the goal line for a 20-yard touchdown.

After Bullitt Central was pushed back half the distance for being off-sides, Durbin kept the ball up the middle for the two-point conversion.

Now it was game on.

With Ernspiker, the normal kick-off man for the Eagles on the sidelines with cramps, North Bullitt sent Garrett Coy in for the kick-off. His on-sides kick was nearly perfect, bouncing off a Bullitt Central player and being recovered by Hunter Puckett at midfield.

Following a holding penalty, Durbin threw a deep pass that either Fetter or Priest could have caught. Fetter made the catch at the Bullitt Central 30-yard line as the clock clicked below six minutes. Ernspiker did run the ball to the 25-yard line on third down, but on fourth down Durbin was sacked at the 30.

Before the fourth down play, Sams had used his final time-out. In fact, neither team had a time-out by the four-minute mark.

Bullitt Central got 9 yards on two runs by Pedley to start the drive and could have sealed the win with a first-down, but Pedley was stopped for no gain on the next two plays, giving the ball back to North Bullitt at the 39-yard line.

The Eagles got to the Bullitt Central 15-yard line, but could get no further.

After the game, first-year Bullitt Central’s Lewis Clark was presented a game ball for his first win as a head coach at the age of 66. However, Clark actually had the head-coaching duties a year earlier when he was an assistant coach at North Bullitt and head coach Adam Billings was sidelined by Covid.

“Both teams played really hard,” Clark said on the field after chatting briefly with both Sams and Billings. “To be honest, either team could have won it and either team would have deserved it.

“I felt for two-and-a-half or three quarters that we controlled the game,” the Cougar coach pointed out. “It’s a young team. They were up two touchdowns (for the first time this season – twice), but then gave up a score.”

Clark has always emphasized special team play, but this team performed poorly on the on-sides kicks.

“Those on-sides kicks drive me crazy,” the coach said. “Their guy did a good job (kicking) and we did a poor job.”

Next Games: Bullitt Central moves on to play at home on Friday against Bullitt East in The War. The Chargers are coming off a big win over Graves County on the road. The Bullitt Cup will be on the line in the game set for a 7:30 p.m. kick-off in Shepherdsville.

North Bullitt will make another run at a first victory this season as they will make the short trip to Shelbyville to play at Shelby County. The Rockets are 2-2 overall, but are coming off a 41-6 loss to Fairdale.