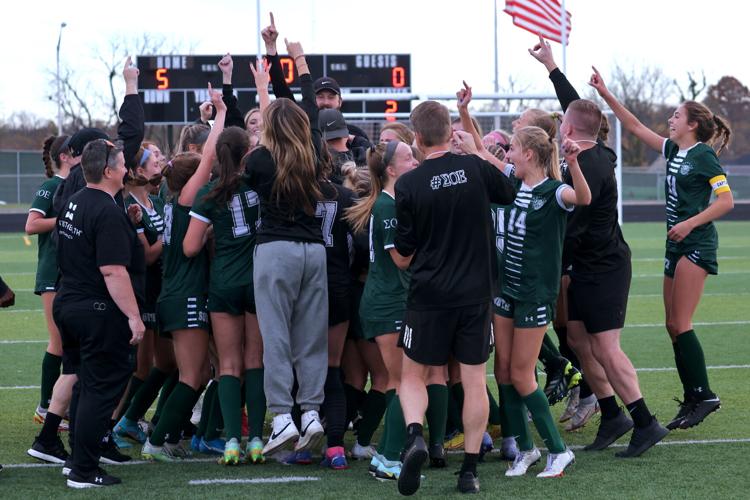 South Oldham celebrates after beating Elizabethtown 5-0 in the state championship on Oct. 29. 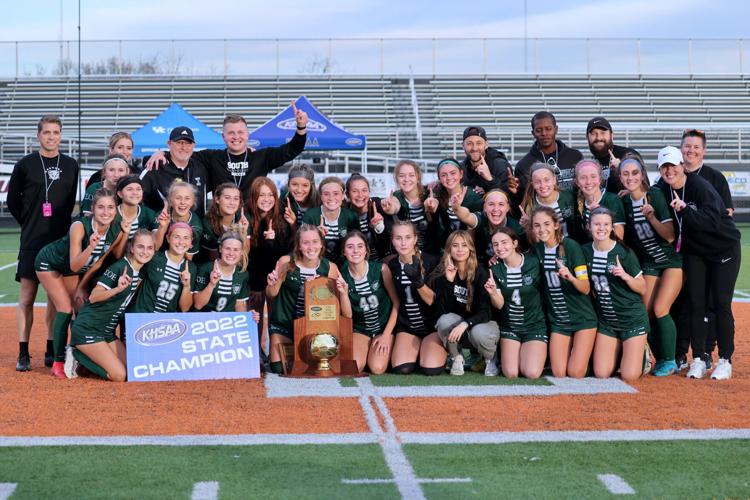 South Oldham celebrates after beating Elizabethtown 5-0 in the state championship on Oct. 29.

Add another star to the crest on South Oldham’s jersey.

The Lady Dragons captured the program’s eighth state title with a 5-0 victory over Elizabethtown in the championship on Oct. 29 at Frederick Douglass.

“I’m so proud of the girls, I’m proud of the staff, I’m proud of all of the hours that went into this,” SOHS coach Ken Burke said. “It means the world to us because we’re adding to the legacy that South has had from years before. We’re just trying to be good stewards of the program, and the girls did a great job of that and taking it to the next level.”

South Oldham built its program on the principle that the players compete for those that played before them, those that play with them, and those who will play after them.

It’s fitting that this year’s decorated senior class honored the program’s class of 2022 – which fell one game short of a state title last year – by reclimbing the mountain and reaching the summit.

“We’ve probably all gotten texts from every single senior (from last year). I’ve gotten multiple of them like ‘You guys need to go win this,’” senior Marley Kahle said. “I was like ‘We’re going to go win this for you. This isn’t just for us – it’s for you guys.’”

When the class of 2023 joined the team in 2018 as eighth graders, the storied program was aiming to bounce back from two consecutive losing seasons.

The Lady Dragons went 13-6-1 and reached the Eighth Region finals that season with the bulk of the class waiting in the wings at the junior varsity level.

The class entered varsity mix the next fall. Since then, the program has gone 66-11-2 with three region titles, a state runner-up finish and now a state title – with some help from those who played before them and those who will play after them.

“We all wanted to play as seniors tonight for the seniors,” Burke continued. “There’s only nine of them, so the underclassmen had to step up and play with them, and they did their part.”

All five of South Oldham’s goals in this year’s championship came off the feet of seniors.

Ava Roberson found Marley Kahle with a through ball in the seventh minute, and Kahle touched the ball past the drawn out keeper and tapped it in to give South Oldham an early lead.

“The first goal is always the most important goal to get us rolling,” Kahle said. “We knew that it would take a little while to get one, and I think that it coming a little bit faster than we thought was a really good thing. I think it riled everyone up.”

“Some of it was the way the game was settling,” E-town coach Robert Zoeller said. “We knew we couldn’t open ourselves up to them a ton, so we had to sit and defend and counter a little bit.”

The strategy stifled the Lady Dragon offense for the remainder of the first half, but Katie Beth May snuck into the middle of the defense and scored an Ally Byrd pass to put South Oldham ahead 2-0 four minutes into the second half.

With South Oldham’s defense having allowed just one goal in seven postseason matches to that point, E-town returned to a more offensive formation.

“As the game wore on, we had to open ourselves up more and more,” Zoeller said. “We couldn’t turn anything to go our way.”

After narrowly missing a pair of deep strikes earlier in the half, Betsy Huckaby drilled a shot from outside the penalty box that glanced off a Lady Panther defender’s back and into the upper left-hand corner of the net 11 minutes later.

“I just remember seeing it bobbing around 18 (yards out),” Huckaby said. “I just put my foot through it, and it went in.”

E-town knocked a Huckaby cross pass into its own goal with 23 minutes to play, and the rout was on.

Roberson put an exclamation point on South Oldham’s first state championship since 2014 with a goal off a Kahle pass with just under two minutes remaining.

“It’s just knowing what’s around us and the communication of, if someone else is on the ball, letting them know where their option is, letting them know if they have time, all that kind of stuff,”  Dardano said of the team’s defensive performance throughout the postseason.

Kahle and May joined Dardano on the all-tournament team after combining for 11 goals and five assists this postseason.

What’s next for the program that now owns the most girls soccer state titles in Kentucky? First, Mexican food, then back to the grind for title number nine.

“We’re going to go to Gustavo’s (Mexican Grill) and celebrate,” Burke said. “After that, we’re going to get to work on next year. I know that the girls are going to come back hungry. I don’t know if we can make it back to this point or not, but I’m going to be thankful for every moment that we had in this run. It was a blast – such a special year.”

A special year indeed – one that was highlighted not only by the state championship, but also by the relationships built along the way amongst dozens of people striving towards a common goal.

“I can’t even put it into words,” Dardano said. “For all of these great people and great humans to be around me is just fantastic.”