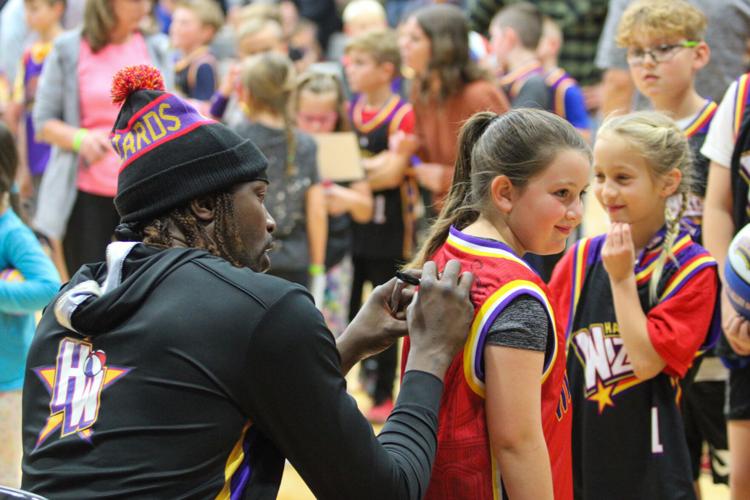 Kids lined the gymnasium floor to receive autographs from each Harlem Wizard before Tuesday’s game against the HC Hillbillies. 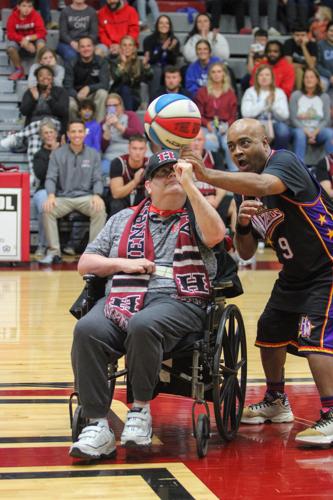 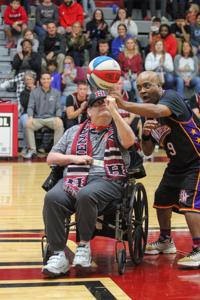 Jeff Stein, aka Mr. Wildcat, spins the ball on his finger with the help of A-Train. 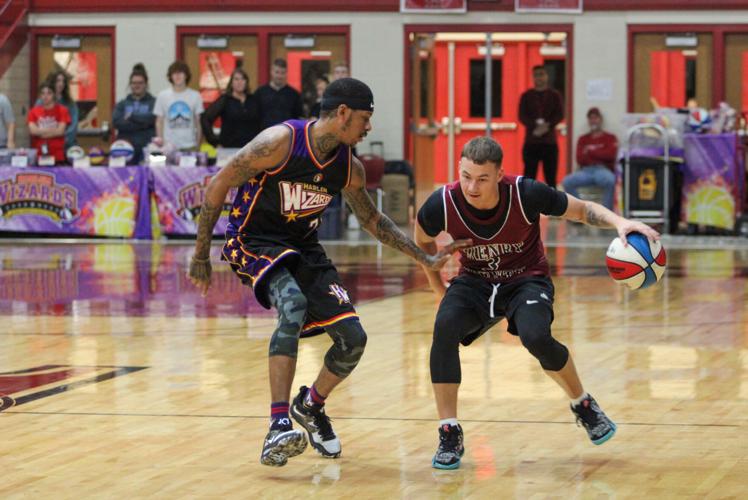 Tyler Gray drives toward the basket as Mr. Bounce steps in on defense. 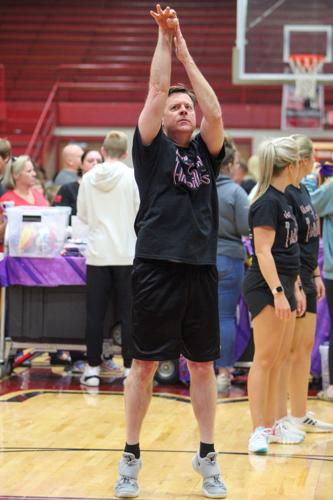 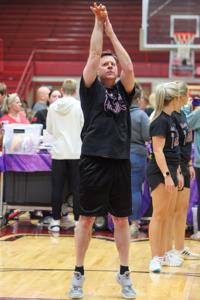 Kids lined the gymnasium floor to receive autographs from each Harlem Wizard before Tuesday’s game against the HC Hillbillies.

Jeff Stein, aka Mr. Wildcat, spins the ball on his finger with the help of A-Train.

Tyler Gray drives toward the basket as Mr. Bounce steps in on defense.

The world-famous Harlem Wizards brought their “trick hoops and alley-oops” style of play to Henry County on Nov. 1.

The Wizards took on the Henry County Hillbillies, a team comprised of teachers, staff and administrators from Henry County Public Schools.

The action-packed evening was a fundraiser for Henry County’s Class of 2024, specifically for Project Graduation.

“The event was a huge success. The Harlem Wizards provided an entertaining evening, and the funds raised will benefit Henry County High School class of 2024. This occasion would not have happened without the diligent work of Mary McManis who organized the entire event. The class of 2024 can look forward to a great junior prom and an even better senior prom and project graduation,” said junior class sponsor Jennifer Van Bever. “A huge thank you goes out to Mary McManis, our sponsors, school staff, and parent and student volunteers. Also, our community showed up with support, enthusiasm, and ready for some fun. The class of 2024 is very fortunate to have the support of our wonderful Henry County community!”

Project Graduation, one handout explained, “provides a safe place for seniors to go after graduation. Project Graduation is a highway safety prevention program providing an alcohol-free, drug-free environment where students can have overnight fun, be safe and off-the-road.”

Hundreds of spectators filled the Henry County High School gymnasium to witness the high-flying tricks and humor of the Wizards for the first time since 2019.

According to the official Harlem Wizards website, the group was founded in 1962 by Howie Davis. His goal was to merge sports and entertainment in a lofty attempt to “create a better show than the Harlem Globetrotters.” Now, the Harlem Wizards travel across the country for fundraising events at schools and non-profits. The group has visited nearly all 50 states and several countries around the world.

Different ticket packages offered an array of experiences for those in attendance. One package allowed kids to warm up with the Wizards before the game, engage in a meet-and-greet session and receive a Harlem Wizards “Wiz Kid” jersey.

The Wizards also signed autographs for the kids before the game, at halftime and immediately following the game.

The Wizards brought six players from the “Broadway Unit,” including Lloyd Clinton aka “Loonatik,” Devon Curry aka “Livewire,” Leon Sewell aka “Space Jam,” Arnold Bernard aka “A-Train,” Eric Jones aka “Broadway” and “Mr. Bounce.” The voice of the Wizards was Jamel Thompson.

After one quarter, the Wizards led 16-13. Their unique passing weave kept Hillbilly defenders scrambling for position, which only ended in points for the Wizards.

Every four minutes or so, a fresh round of five Hillbillies took their spots on the court. Wright, the Henry County football coach, stepped up early in his first shift with defensive intensity. He set a hard pick on A-Train at half-court, much to the dismay of the Wizards. Following another interaction with A-Train on the next play, Wright was promptly chased out of the gym only to emerge back on the court before being frantically followed with a plastic bat to the other side of the gym.

Throughout the game, the Wizards paused to crack jokes with each other and fans in the stands. At one point, the Wizards began playing baseball on the court with a basketball and plastic bats. In another instance, one Wizard ran over and flung a bucket of shredded pieces of paper into the crowd.

“The Wizards always put on a good show and create so much excitement in kids about the game of basketball. It takes a village of people to pull off an event like this. Parents and HCPS staff consistently go the extra mile to provide such opportunities for not only our kids but for the community to enjoy as well,” said Tingle.

In the third quarter, the Wizards stopped play, evened the score and swapped players with the Hillbillies. Henry County’s squad took Mr. Bounce and Livewire, while the Wizards gained Shelby and Zack Mings.

Jeff Stein, also known as Mr. Wildcat, also got in on the action late in the game. He was brought onto the court, and with the help of A-Train, spun the basketball on his finger.

The incredible dunks and swift shooting became too much for the Hillbillies to overcome in the end, resulting in a 73-64 win for the Wizards.

“I feel like our team gave a good effort! We could have been better defensively but our effort and showmanship were top notch,” said Tingle.