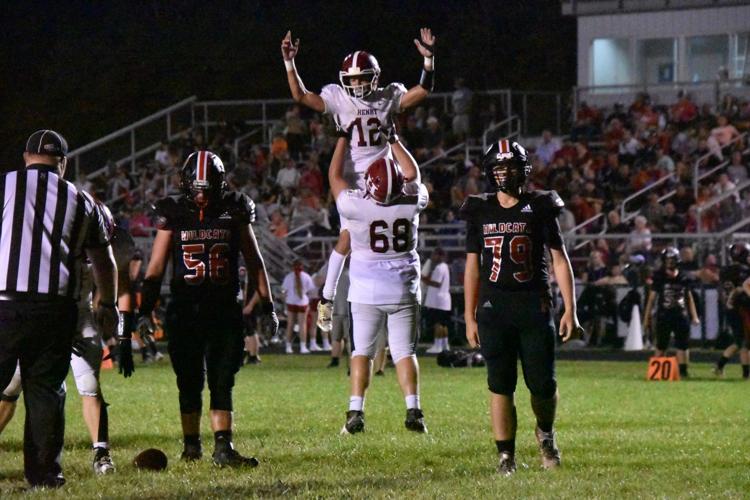 Layne Hancock hoists Luke Lyons in the air to celebrate after Lyons’ touchdown. 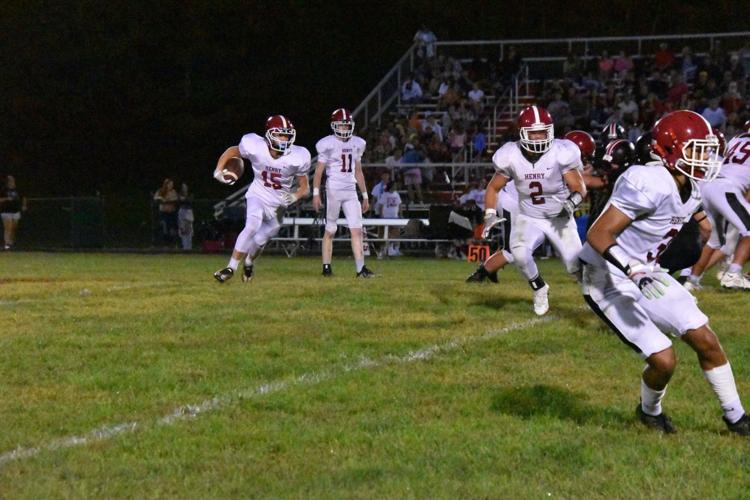 Dallon Fitzgerald breaks away for a run.

Layne Hancock hoists Luke Lyons in the air to celebrate after Lyons’ touchdown.

Dallon Fitzgerald breaks away for a run.

Eight different Wildcats recorded a carry in the stats sheet to lift Henry County to a 48-6 win over Pendleton County on Friday.

“It’s exciting,” said head coach Matt Wright. “This is a game that we had circled, we didn’t want to overlook because we thought we should be 4-0 going into DeSales (on Sept. 23). We were like, ‘Well that’s our first objective, can we be 4-0 going into districts?’”

To stay undefeated, Henry relied on its tried-and-true running game that compiled a season-high 329 yards on 28 carries. Yet, the Wildcats made a point to start the game with a heavier focus on passing the ball.

The efforts paid off in the first quarter as quarterback Jordan King found Blaik Nation for a 39-yard touchdown. The extra point from Morgan Wilson was good to put Henry up 7-0.

Nation, along with Trenton Hardy, further proved their dominance on offense all evening. Hardy had his sole touchdown of the game in the first quarter on a 10-yard rush, but he remained a threat and had two big third down catches to sustain drives.

Both men put up strong numbers on the receiving end as well. Hardy had two catches for 40 yards and Nation finished with three receptions for 76 yards, which included his first quarter catch for a touchdown.

“He (Nation) had 55 yards rushing and 76 yards receiving. That’s a heck of a night and he’s playing defense. That’s huge,” Wright said.

King led the charge with 158 yards passing, completing 12 of his 17 passes. Wilson had one pass attempt, which was intercepted for Henry’s only turnover.

“Eventually we’re going to have to be able to throw the ball when we get into our district and Friday night was a good night to kind of work on some of that stuff,” Wright said.

Passing was an emphasis to start, but running the ball helped put the game out of reach in the first half and extend the lead in the third quarter.

A 10-yard run from Nation and an extra point from Wilson put Henry ahead 21-0 in the second quarter.

Dallon Fitzgerald got into the action early and notched two touchdowns, the first of which was a 2-yard run in the second quarter to push the lead to 28-0.

Henry went into the half leading 34-0 after King connected with Luke Lyons on the last play of the half for a 10-yard touchdown. The Wildcats went for two points, but the attempt was unsuccessful.

Fitzgerald put up his second touchdown to start the scoring in the third quarter on a 30-yard rush. He ended with four carries for 83 yards.

“Dallon Fitzgerald played amazing. He was a guy that we put in pretty early, gave him some carries. He’s a guy that’s working hard and doing all the things we ask and he’s somebody who can really help us,” said Wright.

The “big four group” of Hardy, Nation, Fitzgerald and Ray Matthews, who had two carries for 27 yards, had the bulk of the carries as Wright wanted, but they aren’t the only ones that can explode for a huge gain.

“There’s a plethora of guys that can run the ball and score points for us,” Wright said.

Pendleton County earned its only points on the drive following Fitzgerald’s touchdown. Pendleton had a short touchdown run to avoid a shutout, but by that time, a running clock had already been implemented.

“We’re doing what we’re supposed to do to teams that we’re playing. That’s kind of what we talked about. We should be able to just run the ball down these teams’ throats. We knew that and we also felt like we were just stronger and a more physical front and they shouldn’t be able to move the ball on us. So if we knew we could take away the run for them, they would struggle. We took that away early and then we were able to run the ball,” said Wright.

Henry tacked on its final score of the night on a 39-yard rush from Wilson, whom Wright described as “explosive.”

Due to the running clock, the Wildcats only ran 11 plays in the second half.

“I wanted to get more looks to guys, but I mean, sometimes you just don’t have enough time. You only run 11 plays after halftime, it’s hard to get carries,” said Wright.

In total, no one had more than seven carries on offense. While the main offensive weapons typically get the spotlight, Wright made a point to credit the guys that made the evening successful for the running backs.

The Wildcats have the week off before taking on DeSales on Sept. 23. With the extra days, Wright has his focus on developing the younger players and making small adjustments to have cleaner play.

“We have two JV games scheduled this week, so we definitely want to focus on some of those young guys,” said Wright. “These JV games are crucial to being able to improve the program, not just this year, but years in the future… Then this week in practice, we’re getting an extra four days really of practice, being able to add some stuff, some wrinkles that we haven’t shown yet on film is big for us but more than anything, we’ll have a chance to clean some stuff up.”

“It’s a measuring stick game for us, see where we’re at. We haven’t been able to compete with a couple of those big teams in our district and we feel like this year, our kids have that confidence,” said Wright. “I think the kids feel the magnitude of the game. This could be one of the biggest wins in Henry County history if we’re able to do the things that we think we’re capable of and beat DeSales.”