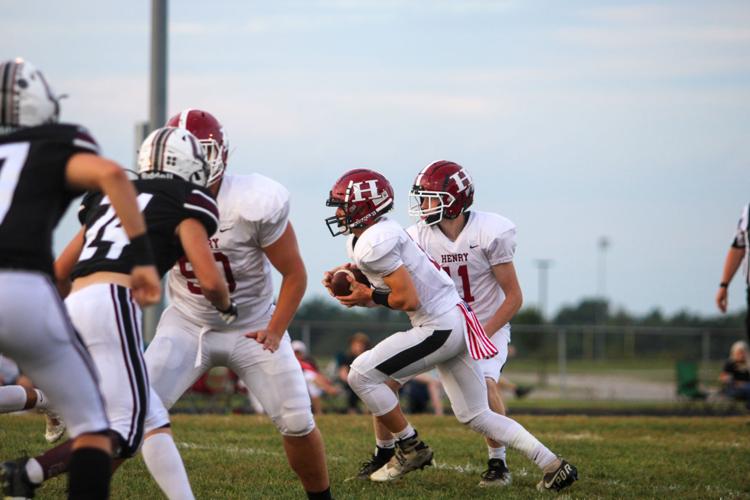 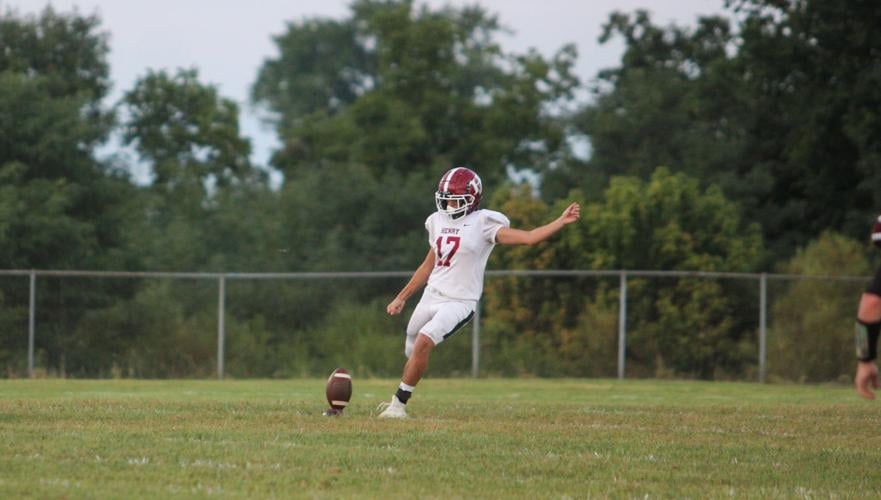 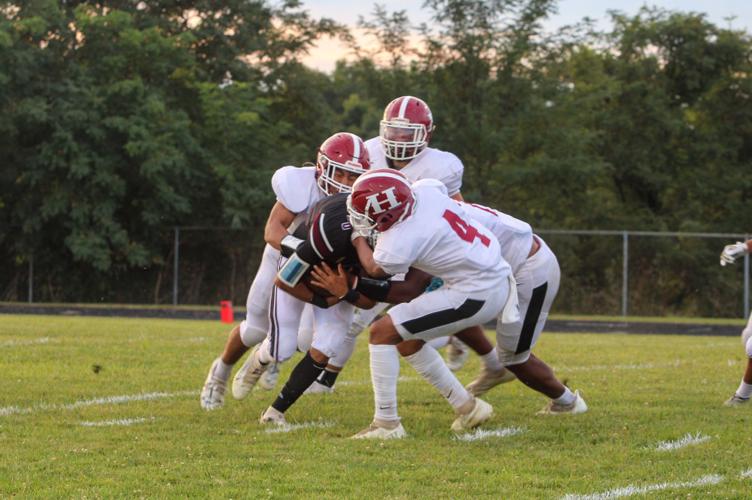 A swarm of Wildcat defenders bring down an Owen County running back. 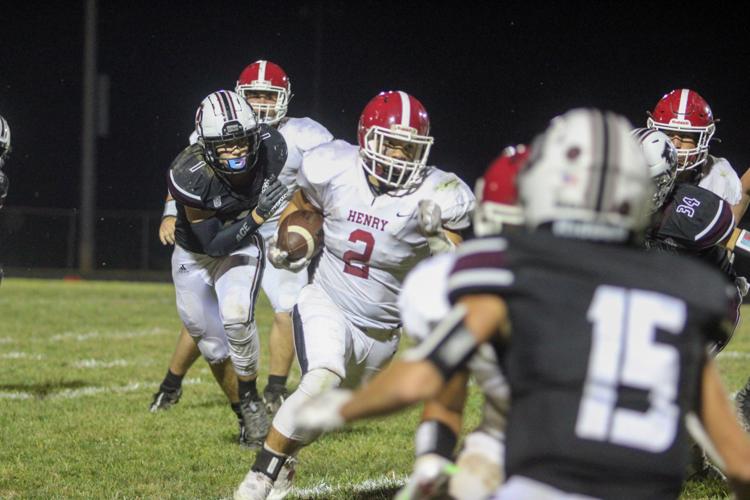 Trenton Hardy scurries through a hole for a gain.

A swarm of Wildcat defenders bring down an Owen County running back.

Trenton Hardy scurries through a hole for a gain.

Two lightning delays in the first half couldn’t slow down Henry County’s scoring rampage as the Wildcats rolled to a 50-0 victory over Owen County.

“We’re excited. I know it’s hard with the stoppage and the go and stop and go,” said head coach Matt Wright. “I think we had some lulls in there but obviously I was pleased with our guys and putting up that many points and getting the shutout so you can’t do much better than that.”

Henry County got its efficient run game involved early and needed just two plays to get on the board on its initial drive. Blaik Nation had both carries, including a 45-yard run to the end zone. Morgan Wilson converted the extra point attempt for a 7-0 lead.

The Rebels bobbled a punt attempt on their ensuing drive and the Wildcats began their possession on the two-yard line. Trenton Hardy picked up both yards on the first play for a touchdown, and Wilson’s extra point gave Henry a 14-0 lead with 8:18 remaining in the first quarter.

Owen’s offense was suffocated for most of the evening and many drives saw the Rebels trying to overcome yardage losses to sustain drives. The Rebels came close to a score near the end of the first quarter on two carries each from Hayden Sneed and Seth Bevis and a completed pass to Kade New, but the Wildcat defense stood firm to force a turnover on downs.

Henry notched its third touchdown of the night on the opening drive of the second quarter. Jordan King connected with Blaik Nation along the left sideline for 68 yards and Wilson knocked in the extra point to push the lead to 21-0.

The first lightning delay struck with 7:08 left in the first half. Once play resumed, Hardy used five rushes sandwiched around two incomplete passes to put Henry at the 11-yard line facing fourth-and-two. King scurried for the remaining 11 yards and Wilson’s extra point was good to add seven more to the scoreboard.

The second lightning delay went into effect immediately after King’s touchdown. Upon resuming play, Owen used a huge kickoff return to have the best starting position of the evening to that point. Two quarterback keeps for Michael Powell and a pass to Cameron Bond put the Rebels in a fourth-and-three situation but Owen could not extend the drive.

Limiting penalties and turnovers has been a focal point all season for Wright, and he was pleased with the progress his team is making in those areas.

“I think we had 13 penalties that first week and then we were down to seven the next week. I don’t know what we were tonight, but it felt like we’re slowly going where we need to be. Had one turnover again tonight, which is not terrible. It’s not what you want. You can afford it when you’re up but it’s all the same. We’re just trying to get to a place where we’re ready for districts,” Wright said.

Henry’s only turnover of the evening came near the end of the first half. King’s pass was intercepted by Colby Young at the 42-yard line.

The Wildcats went without another touchdown until 3:34 to go in the third quarter. Hardy punched the ball in from two yards out and King found Kyle Gillingham for the two-point conversion to go ahead 36-0 and trigger a running clock for the remainder of the game.

Henry started the fourth quarter 23 yards from the end zone. Dallon Fitzgerald picked up three yards on his first carry and Ray Matthews used a nine-yard gain to earn Henry a first down at the 11-yard line. Fitzgerald ran in the 11 yards for a touchdown and the extra point extended the lead to 43-0 with 10:31 remaining.

Owen’s only turnover came on the kickoff return. The Rebels fumbled and Henry recovered at the 45-yard line.

The Wildcats’ final touchdown of the night came on a two-yard rush from Matthews. The extra point sailed through the goalpost to push the lead to 50.

With numerous running backs capable of putting up big numbers each week, Wright has the unique challenge of getting everyone involved.

“We had the opportunity to see Dallon and Ray tonight, to be able to run the ball and they came in, played great. It gives you a lot to think about. It’s exciting,” said Wright. “It’s a good problem to have to have so many guys to run the ball that you have to figure out ways to get them the ball.”

The Wildcat defense locked in on Owen’s final possession to secure the shutout win, which was the second scoreless outing for the Rebels in three years against Henry.

Henry’s defense combined for 67 total tackles, including 11 tackles for losses. Gillingham and Traven McFarland each had seven tackles to anchor the defense, and four others notched five or more tackles.

The victory puts the Wildcats at 3-0 for the season as tougher match-ups await in the coming weeks.

“The most important games with districts are still in front of us so we want to be best when we’re playing in the districts,” said Wright. “We want to continue to get better, and it doesn’t matter who we’re playing against, just getting better for ourselves and seeing where we are at the end.”