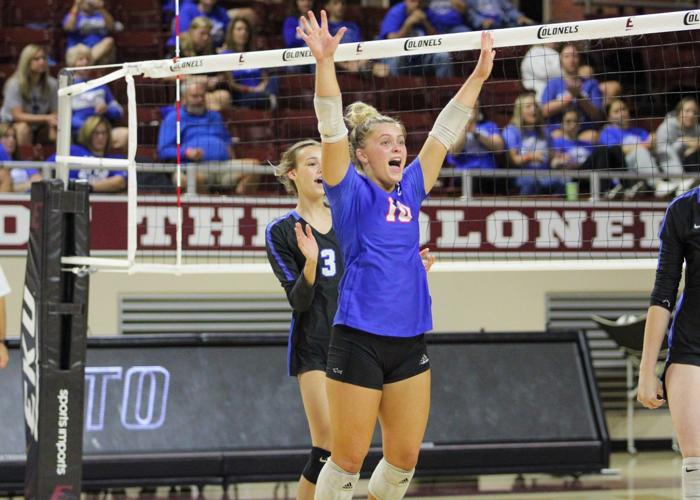 Julia Dentinger celebrates after a big point against Trinity. 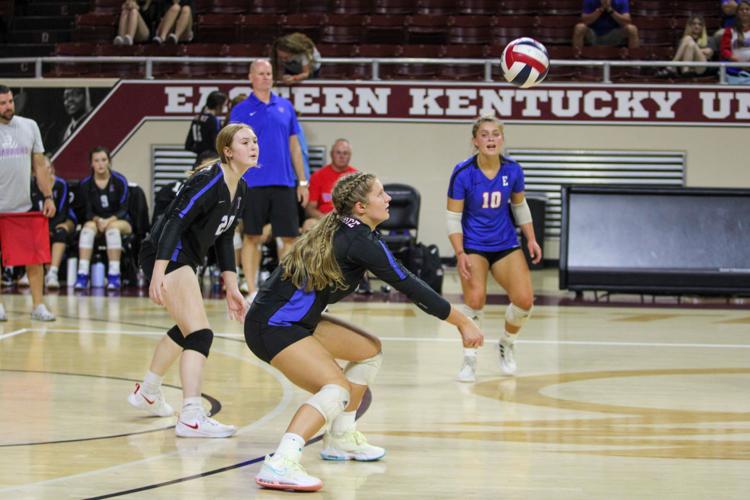 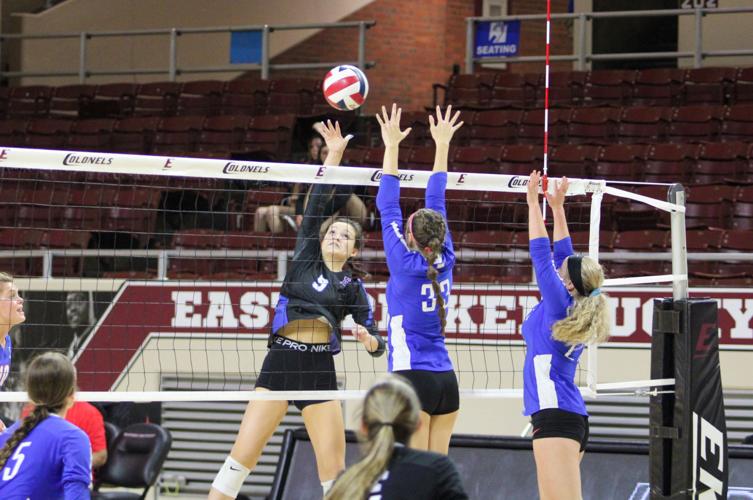 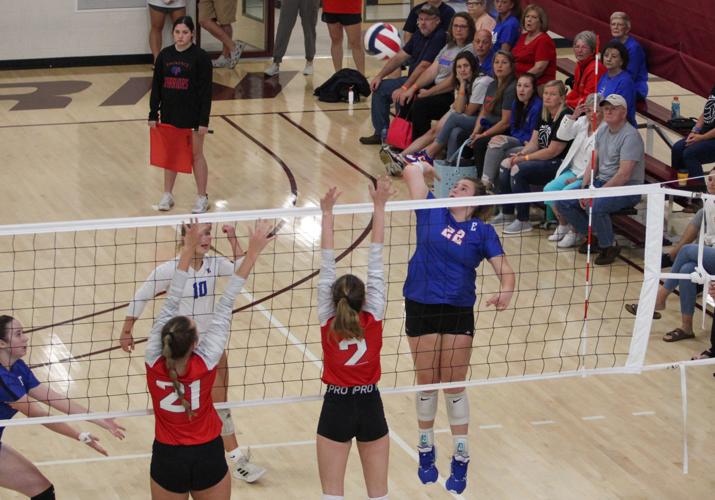 Tessa Stenger swings from the outside against Todd County Central.

Julia Dentinger celebrates after a big point against Trinity.

Tessa Stenger swings from the outside against Todd County Central.

The Eminence volleyball team traveled to Eastern Kentucky University for the All “A” Classic State Volleyball Tournament on Sept. 16 and 17.

The Warriors went undefeated in pool play before falling in the opening round of the championship bracket to Community Christian.

Eminence started the tournament strong with a sweep against Raceland by scores of 25-14 and 25-19.

The Warriors trailed by three in the opening set when Tessa Stenger stepped behind the line and helped Eminence rattle off an 11-0 run to take an 18-10 lead.

In that run, the Warriors used several unforced errors by Raceland and powerful kills from Megan Sweeney, Lauren Thomas and Rylee Shupert to swing the momentum in their favor.

Two consecutive kills from Sweeney on the outside, one a blast straight down and one a perfectly placed tip to the middle of the court, put Eminence ahead 21-14. Raceland ended the set with four errors in a row to give the Warriors a 1-0 advantage.

The miscues for Raceland and timely attacks for Eminence stayed the same at the start of the second set. The Warriors led 6-2 after three Lady Ram misses, a kill from Thomas in the middle and two hammers from Sweeney on the outside.

Raceland regrouped and kept Eminence on its toes, placing free balls and kills in open spaces and tied the set at 10 all when Stenger hit the ball out from the outside.

Stenger turned around and broke the tie on an outside kill to kick off a 3-0 run.

Raceland pulled within two again on a Warrior service error, but Eminence pushed the lead to six on three Sweeney kills and a soft punch over the net from setter Jenna Carter that fell just in front of the ten-foot line.

Sweeney ended the game with 15 kills.

The Warriors capped off the win on a service ace from Stenger to move to 1-0 in pool play.

The Warriors moved to the main court in McBrayer Arena and lived up to the hype of playing under the bright lights.

“That first set was so fast, big serving run. Jenna really lit it up. Everybody on the serving standpoint just got big runs, three, four, five serves every time so we really kind of hit the ground running on the first set and then just fell flat in the second,” said head coach Eddie Sweeney.

Carter started at the service line and built a 12-1 lead to open the game. She had two aces and many other serves that put Trinity out of system or led to dropped balls on their side.

Two kills in the middle from Thomas and a monster kill from Sweeney on the outside prompted a Trinity timeout with Eminence leading 19-9. Following the timeout, Sweeney slammed down another outside kill and Carter earned an ace before the Lady Raiders went on a 5-0 run.

Trinity ended the set with two errors, though, to give Eminence a 1-0 lead.

The second set shifted to Trinity throwing Eminence out of system and forcing the Warriors into making errors.

“Kind of silly mistakes to be honest. I think whether that’s just nerves or playing in a big coliseum like this, that kind of set in a little bit but they dug their way,” said Sweeney.

The set was in favor of Eminence after a back row kill from Sweeney but Trinity responded with a 6-0 run to take the lead 13-10. The run ended on a missed serve.

Eminence got two straight points before Trinity put together a four-point run to extend the lead.

The Warriors could not easily return Trinity’s serve and tried several players in the back row to try to break the streak. The errors added up and Trinity evened the match on a kill in the middle.

Eminence remained composed and took back control in the third set. Stenger and Sweeney had great kills on the outside throughout the set and forced Trinity into making errors. A back row kill for Sweeney put Eminence in the lead 15-7 and her kill in the middle moved the lead to 19-10.

Trinity used big kills from the outside and middle to make a comeback effort, but the Warriors were too much to overcome.

“We gave them a good conversation in between those sets and got a little red faced but they responded and responded the way they should’ve and couldn’t ask for anything more,” said Sweeney.

To slow down the Trinity attack, Izabelle Mack entered into the middle blocker position and helped slow down several attacks that were falling easily in the second set.

“Izabelle stepped in, just did a fantastic job getting touches, slowing the block down which we really needed. Trinity was really getting excited and the more excited they got, the harder they swung so we needed to get some blocks to slow the ball down and Izabelle did that. Just exactly what we needed,” said Sweeney.

“We’re playing three freshmen, four freshmen and an eighth-grader a lot of times and this is a big stage for young players like that and sometimes it just takes a little time to get settled in and I think once we got settled in we did good,” Sweeney said.

Eminence kept its streak going with a 2-0 win over Todd County Central on Saturday morning.

The first set was a back-and-forth battle with strong hitters making plays for both teams. Eminence trailed 7-4 before tying the set at eight all after the Lady Rebels couldn’t return a ball from Shupert. Stenger made a spectacular dig to set up the play by Shupert in the rally.

The teams seemed to trade points for the rest of the set and neither team went ahead by more than two or three points.

Eminence put together a 4-0 run at the end of the first set to regain the lead. Two Sweeney kills, an ace from Dentinger and a Lady Rebel error gave Eminence set point and Todd County Central hit the ball out to end the set.

The second set started as a tightly contested matchup. The Lady Rebels jumped out to a 6-3 lead but Eminence quickly recovered. The points alternated until the set was tied 12-12. From there, Eminence strung together an 8-0 run with Dentinger behind the service line.

The Lady Rebels had no answer for the strong float serve from Dentinger or the well-placed attacks at the net from several Warriors. In the end, Eminence ended the set on a 13-2 run to secure the victory to go undefeated in pool play.

Sweeney ended with 12 kills and Sara Welch had four kills.

The Warriors fell into a large hole early in the first set and nearly made a terrific comeback.

“That first set we dug a big hole, a big hole, and it took a lot of energy I think to try to get out of it. We fought back, got it close in the first set but it wasn’t enough. We actually kept that momentum into the second set too and actually played really well,” said Sweeney.

Dailyn Cauley for Community Christian was a force to be reckoned with the entire match and Eminence struggled to counter her smart plays at the net.

“She’s just mechanical. I’ve never seen a player like that that could hit the same spot within a two-by-two area and we didn’t have an answer for it. We made adjustments defensively with middle back. She’s a good player, she’s mechanical player just hitting that same spot. It’s hard,” Sweeney said.

Her play, and the serve of Kelsey Hughes helped the Lady Warriors race out to an 11-1 lead. The sole Eminence point in the run came on a kill from Thomas in the middle.

The Warriors came back with a 7-0 run on kills from Sweeney, Welch, and Shupert and a service ace from Carter.

Eminence fought hard in the second set and opened on a 9-2 run to force a Lady Warrior timeout. Sweeney was lights out in the set, using powerful outside attacks down the line and cross court when Eminence needed to finish off a play.

Her right-side kill secured a second set win as Community Christian made multiple unforced errors and struggled to get a string of points together.

Cauley threw the Warriors off all game on her push kills over the net to the back corner near the line. Eminence tried to adjust, but often missed by a second or two. When the Warriors did shift to prepare for the play, Cauley switched gears and crushed kills near the ten-foot line instead.

She kept this up in the third set, but Eminence’s efforts from the sets before started to wear off. Community Christian led 8-1 on Eminence miscommunications and service aces before the Warriors called a timeout. Sweeney had three kills in a row as Eminence tried to cut into the lead and Stenger contributed several kills of her own. A kill from Welch and another from Stenger cut the lead to four but Community Christian kept applying the pressure and making big play after big play.

“We had some great defensive plays. Jenna actually had a really good day today distributing the ball around. I thought Tess had a good day, Sara had a good day. We got some touches,” said Sweeney.

Eminence made one final push late, cutting the lead to 22-20 and 23-21 but Bryce Berry served into the net and Community Christian earned a kill off the block to finish the game.

“I thought our serving was fantastic all day but I think trying to come back, you know, being down six in the first set, giving all we’ve got to get back from that and then the way we played in the second set, I think it just took all the gas out of us. There wasn’t a whole lot left in the tank to finish out that tiebreaker,” said Sweeney.

For her performances, Sweeney was named to the all-tournament team. She ended the final match with double digit kills.