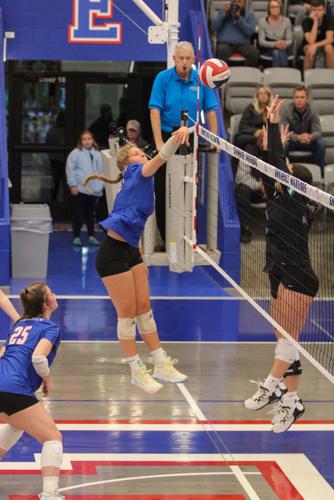 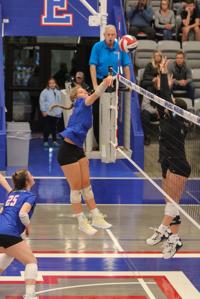 Megan Sweeney hits around the North Oldham block for a kill. She tallied 11 kills in the loss. 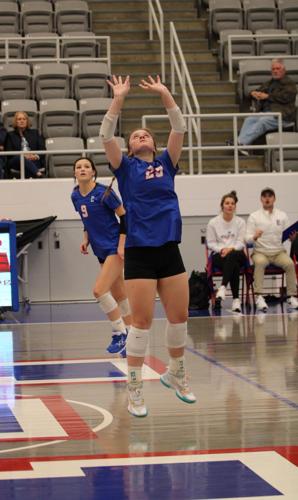 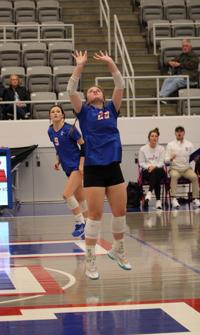 Jenna Carter finds a hitter against North Oldham. She ended with 12 assists.

Megan Sweeney hits around the North Oldham block for a kill. She tallied 11 kills in the loss.

Jenna Carter finds a hitter against North Oldham. She ended with 12 assists.

Eminence put its 11-game win streak, and season, on the line against the top team in the Eighth Region on Wednesday.

The Warriors, looking to “shock the world,” fell short of that feat against North Oldham.

The Lady Mustangs put together a clean and consistent attack to sweep Eminence 3-0 (25-7, 25-12, 25-17) in the Eighth Region tournament semifinals.

“They’re a juggernaut, they really are. They don’t make mistakes and we could’ve played a whole lot better, there’s no question about that,” said head coach Eddie Sweeney.

Whether it was the pressure of the game or the caliber of the opponent, the Warriors reverted back to uncharacteristic errors that had been absent for weeks.

“I think we’ve been peaking and playing some of the best volleyball we’ve played all season and over the last several weeks and I was hoping that would continue today, and I think just the speed of the game got to us early and we just couldn’t recover from it,” said Sweeney.

A team that thrives off lengthy service runs, Eminence couldn’t string together more than a few points at a time and finished with one ace on the evening.

The Lady Mustangs jumped out to a 7-1 lead in the opening set, setting the tone for the rest of the game. A tip kill in the middle by Megan Sweeney and a huge block on North Oldham’s Caroline Rankin cut the lead to 10-4.

Yet, the kills added up for North Oldham from a variety of hitters. On top of the offensive efficiency, the Lady Mustangs took advantage of three straight hitting errors from Eminence to prompt a Warrior timeout with the score in favor of North Oldham 21-7.

Another large lead catapulted North Oldham in set two. Eminence struggled early in serve-receive and North Oldham batted down two straight passes tight at the net. Rankin slammed a set from Lucy Rankin down on the outside to move the lead to 10-1.

Serve-receive remained shaky as the set progressed. North Oldham had six aces in the middle stretch of the set from three different servers.

Sweeney tried multiple players in the back row to stop the bleeding, but North Oldham found a way to target each new passer.

“It just showed how much of a mental game it really is. I think we by far have the talent to compete against a team like that,” said Sweeney. “You got to bring your A-game and you got to stay out of your own head all at the same time to put together a good match with a team at that level.”

In between serving runs, Tessa Stenger and Sweeney found the floor for kills to break up the momentum momentarily.

Sweeney placed a roll shot in the back corner to stave off set point, but Jenna Carter sent a serve into the net to give North Oldham a 2-0 match lead.

Eminence bounced back to start the third set. North Oldham lead 8-5 before two hitting errors and an ace by Sweeney evened the set at 8-8. The Warriors gave up six of the next seven points to offset the surge, though.

Stenger sent a swing off the block on the right side for a kill to move the score to 14-10, but the Lady Mustangs pumped out four straight points to force Sweeney to call a timeout.

Out of the break, North Oldham added three more points to its streak, including a forceful tip kill in the middle for Reagan Baxter. She repeated this play several times throughout the night with success on most attempts.

Eminence used one final push late in an effort to save its season. Two huge kills on the outside from Sweeney, along with a tip kill for Carter and a hitting error by North Oldham, put the Warriors within seven.

Baxter halted the run with another strong tip before Sweeney chipped in another outside kill.

Two straight errors had Eminence within six, but two consecutive kills for North Oldham finished off the set, and the match.

Even with the loss, Sweeney was proud of all his team has accomplished over the last few months.

“I wish it was a better outcome but we’ve hit all of our goals at the beginning of the season we had so I’m really, really proud of that,” said Sweeney. “Winning district and Class A and going to state and undefeated in district and making it past the first round of region.”

The loss also marks the end of the storied high school careers of Sweeney, Carter, Welch and Julia Dentinger. Sweeney finished with 11 kills in her high school finale. Dentinger scrapped for 18 digs and Carter dished out 12 assists.

Carter and Sweeney were selected to the Eighth Region all-tournament team as well.

The four seniors are not the only ones saying goodbye to Eminence volleyball. After seven years at the helm, coach Sweeney is stepping away from his role as head coach.

“I never thought that I would be here this long. I thought it was a temporary thing when we first started 10 years ago in middle school, but I don’t regret a minute of it,” said Sweeney. “I’ve had a great time. We’ve had so many great kids come through this school and this program and go on to do great things and it’s been a fun run. I’m sure once I can catch my breath, I’m sure I’ll miss it.”

As they depart, Sweeney, and the senior class, have left the program in a good position to be successful for years to come.

“We’ve got so much young talent here that are just eager to learn and want to play hard, so I’m really, really happy to be able to hand over that level of talent to the next person,” Sweeney said.