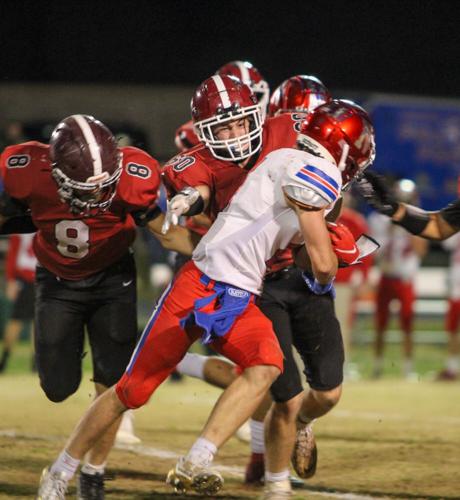 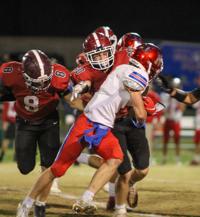 Brody Staples wraps up a Nelson County running back in the first half of Friday’s playoff game. 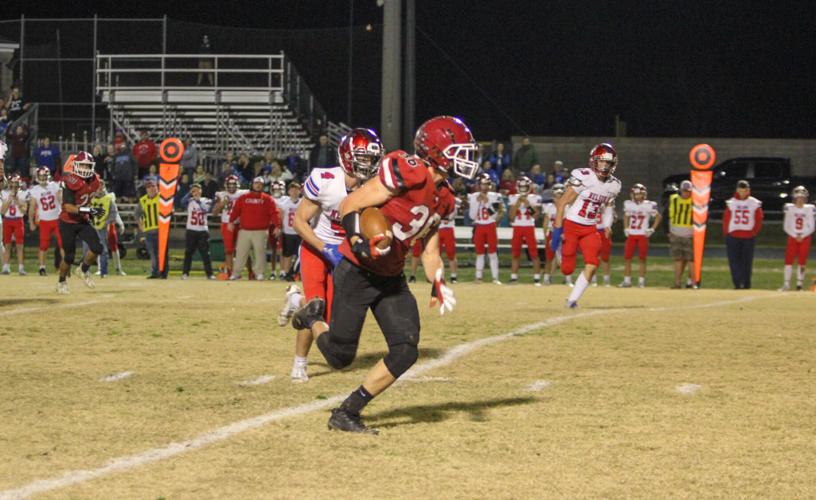 Nathen Corum picks up extra yardage after catching a pass from Jordan King against Nelson County.

Brody Staples wraps up a Nelson County running back in the first half of Friday’s playoff game.

Nathen Corum picks up extra yardage after catching a pass from Jordan King against Nelson County.

The Wildcats already garnered increased attention after starting the season 5-0 and securing district runner-up honors in a competitive group of Class 3A teams. With a victory in the opening round of the playoffs, in the team’s first home playoff game in years, Henry County would become the fourth team in school history to earn a “W” in the postseason.

With the stakes heightened, the Wildcats rose to the occasion with an all-out effort. In a tough battle between similar playing styles, Nelson County withstood a late comeback effort to defeat Henry 37-34.

“The guys never quit. They’re a good football team,” said head coach Matt Wright. “Whoever made the least amount of mistakes or made the most stops and all those things was going to happen and we needed a couple more stops to win that game, but the guys’ effort was always there. I don’t question the effort at all.”

The Cardinals put the first points on the board with a field goal in the first quarter. Henry’s defense nearly forced a fumble to back Nelson County away from the 4-yard line before Russell Lux stepped up for a short-range field goal with 7:13 on the clock.

The Wildcats took the lead with 1:13 on a 2-yard touchdown run from Ray Matthews. He combined with Blaik Nation for every carry during the drive, but Jordan King’s pass to Nathen Corum down the center of the field for 32 yards set up Matthews’ scoring play.

Henry’s patented running game was equally matched by Nelson County. The Cardinals finished the game with two passing attempts, with all their yardage coming on the ground between several players, including Joey Goff.

His 4-yard carry put Nelson County back in the lead 10-7 early in the second quarter. On the following drive for the Cardinals, Evan Hicks broke loose for 10 yards into the end zone to extend the lead to 17-7.

While Henry has success throughout the depth chart at running back, Wright turned to his quarterback on the next drive. King’s completions to Landon Robins and Luke Lyons moved the ball across midfield before the run game capped off the drive. Trenton Hardy used a strong run, featuring a stiff arm to keep the play going an additional 10 yards, to place the ball at the 11-yard line. He took the handoff on the next play to the end zone to cut the Nelson County lead to 17-14 with 2:30 to go in the first half.

The Cardinals had a chance to tack on three more points just before halftime, but Lux missed his field goal attempt.

Nelson County shook off the missed scoring opportunity before the break in the third quarter. Goff scurried past the defense for a 13-yard touchdown, and the Cardinals failed to convert their two-point attempt after an offsides call on the PAT moved the ball closer to the goal.

The Wildcats were primed to cut into their deficit on the ensuing possession. Three carries by Hardy and one by Matthews put the ball at the 44-yard line. An incomplete pass brought up fourth down and Henry was called for a false start on the next play. With fourth-and-9, King connected with Luke Lyons along the Nelson County sideline. He was stopped just shy of the goal line, but the play was called back due to a personal foul on the Wildcats.

The two penalties were among the four flags thrown in five plays against Henry. The other two penalties were a holding call and another personal foul. In all, the Wildcats were backed up from what would’ve been a couple yards from the end zone to the opposite 41-yard line.

Yet, Henry bounced back on its next drive with a 1-yard touchdown run from Hardy to pull within three with 10:23 remaining in the game.

The speed from Nelson County took over in the fourth quarter. The Cardinals needed just three plays, all runs, to score. Trevor Beam escaped the Wildcat defense for a 44-yard touchdown with 8:55 to go.

Henry once again cut the lead to three on a 4-yard quarterback keep from King on fourth-and-goal with 5:06 left in regulation.

Goff earned his third rushing touchdown of the evening to move the Nelson County advantage to 10 points with 1:51 to go, but Henry wasn’t finished yet.

With the help of crucial passes from King and a smart run to avoid a sack for a gain of three yards, the Wildcats quickly moved into scoring range. On the fifth play of the drive, King found Nation in the corner of the end zone for a 25-yard touchdown.

“Those are big situations where we block, throw and catch, and those are easy things you talk about but those are hard to do in those situations,” said Wright. “It’s easy to say, ‘Hey we just got to block these guys, see this guy and catch the ball,’ but when it’s fourth-and-5 and you’ve got to catch a ball, we made those catches and it’s special.”

Morgan Wilson’s extra point cut the lead to three with 34 seconds remaining. Wilson’s onside kick attempt on the kickoff went into the hands of the Wildcats, but the referees awarded Nelson County the possession after a penalty, allowing the Cardinals to run out the remaining time on the clock.

Wright never questioned his team’s tenacity in a win-or-go-home situation, even when certain plays, and time, were in Nelson County’s favor.

“I know I’m going to go back and watch the film and you could always think, ‘Well, we knew they were going to do this, this and this.’ It’s always in the air, you question yourselves and do those things but I’m excited about how we did play and the fact that our kids didn’t quit. We’re down 10 points with 1:50 left and came back to make it a three-point game and had a chance to get the ball back again so that’s exciting,” Wright said.

The loss marks the end of a monumental season for the Wildcats. Solidifying their name in Henry County lore will have to wait until at least next fall, but the strides the team made this year shows promise that record-breaking games and district trophies will be a frequent occurrence in the future.

“What they’ve done this year, and I know what they’re going to feel losing the last one and losing that game that they wanted, it shouldn’t leave a sour taste in their mouth. They have to realize what they were able to do and how they were able to play to have a winning season,” said Wright.

Most of all, the example of the hard-working senior class will motivate and challenge upcoming teams to build on the team’s recent progress.

“This group, when they came in their freshmen year, they were 1-9, and to grow from 1-9 to having a winning record, have seven wins and set yourself up to win a playoff game, all those things are special and the things that they did are special,” said Wright. “I’m proud of that whole group, especially the seniors for being that leader and kind of creating that culture of winning so it’s exciting to see what will pay dividends down the road from this senior group.”