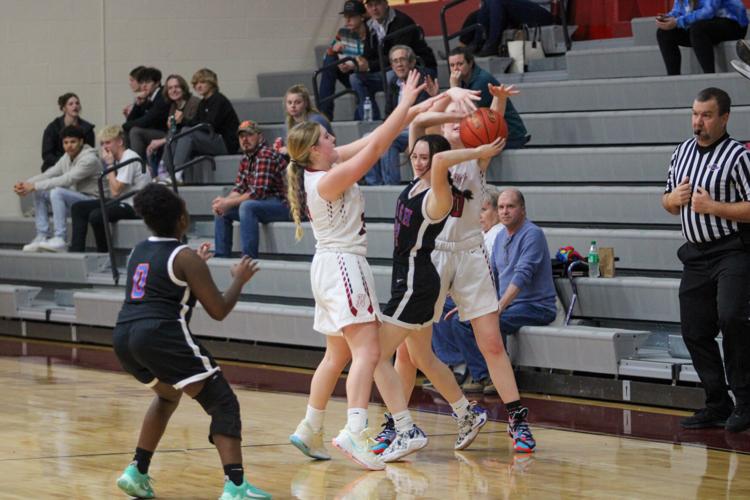 Micah MaGruder and Kennedy Brown trap Frankfort at half court in the first half on Tuesday. The Lady Cats’ pressure bothered the Lady Panthers all evening. 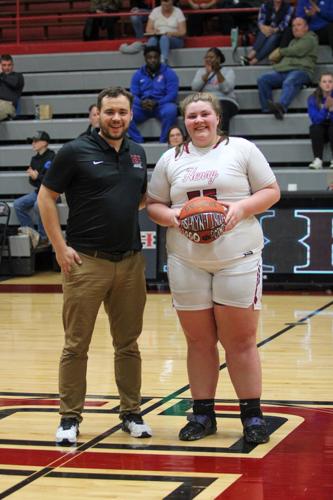 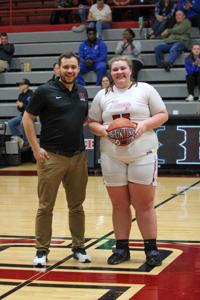 Ashlyn Tingle was recognized after the game against Frankfort on Tuesday, Jan. 3 for reaching 1,000 career points. She is the third player under Jim Hook to hit 1,000 points.

Micah MaGruder and Kennedy Brown trap Frankfort at half court in the first half on Tuesday. The Lady Cats’ pressure bothered the Lady Panthers all evening.

Ashlyn Tingle was recognized after the game against Frankfort on Tuesday, Jan. 3 for reaching 1,000 career points. She is the third player under Jim Hook to hit 1,000 points.

The Lady Cats were no stranger to Tuesday’s opponent.

Just 13 days prior, Henry County squared off against Frankfort at the Autokiniton Christmas Classic at Bullitt Central, and the Lady Panthers won 53-38.

The script was flipped on Jan. 3, though, as Henry County avenged the loss with a 53-48 win at home.

“I thought they were very physical, and we’ve struggled with that so far, but I thought we responded to their physicality,” said head coach Jim Hook.

Frankfort started the game with a 4-3 lead but struggled to hit easy shots near the basket. Henry County had a few early turnovers off errant passes before settling into the game.

The Lady Cats knotted the score at seven all with 2:23 left in the first quarter as Meg Golden found Ashlyn Tingle on the right block for a layup.

London Blythe responded with a personal 5-0 run for Frankfort, and Tingle chipped in another shot on the block to cut the lead to 12-9 at the end of one quarter of action.

Henry County picked up the intensity on both ends in the second quarter. The Lady Cats started on a 6-0 scoring run featuring a corner three from Golden, a free throw from Tingle and layup with contact from Micah MaGruder.

Golden left the game in the second quarter with an injury, but Hook is hopeful she will be back in action next week for district play.

Frankfort’s offense slowed down due to Henry County’s sweltering zone defense, and shots were more erratic than earlier in the game. The Lady Cats took advantage of the miscues and went on an 8-3 run to create some separation.

A straight-on three from MaGruder, an and-1 on the left block for Ella Royalty and a wing three by Madeline Lay helped boost the lead to 23-16 with 2:02 left in the half.

Ellis hit a layup with 1:25 to go to cut the lead to five heading into halftime.

The Lady Cats nearly added to the lead on a shot from around half court by Tingle, but the referees called off the shot, saying Tingle released the ball after the buzzer had sounded.

Henry County extended the lead to double digits in the third quarter. MaGruder scored the first nine points for the Lady Cats, including two 3-pointers in the first 1:30 of play.

Frankfort went about five minutes without a field goal before Blythe drained a three with 2:14 to go in the quarter. The shot kickstarted a 7-0 run for the Lady Panthers. Tingle ended the run with a shot on the block with 46 seconds left, but Blythe used a steal and a layup to cut the lead to 36-30 heading into the final quarter.

Within the first minute of the fourth quarter, Ellis hit two 3-pointers, sandwiched around a Henry County turnover on the inbound attempt, to tie the game at 36 all.

MaGruder used a pass from Tingle to score on the left block to break the tie with 5:38 to go and Lay added a free throw at the 4:55 mark to move the lead to three for Henry County.

Ellis, who hit six shots from behind the arc, knocked in a three to give Frankfort a 41-39 lead with 3:45 left.

Blythe sank two free throws to push the lead to four, but MaGruder responded with a three to put the Lady Cats within one.

Both teams exchanged baskets before Henry County took control. Trailing by four with 2:13 remaining, MaGruder and Royalty hit layups to even the score. With 46 seconds remaining, Lay was left wide open on the wing and drained a three to put Henry County back in the lead.

“I wasn't thrilled we gave up a lead, but I was happy that we fought back. We gave it up and took it back in an environment that got very loud with the boys playing after us,” said Hook.

Frankfort failed to execute down the stretch. The Lady Panthers either missed shots in the paint or had them blocked by Tingle.

MaGruder iced the game with two free throws with 30 seconds left. She finished with a team-high 26 points, 18 of which came in the second half.

“I haven’t looked at the numbers but I’m confident Micah and Ashlyn scored a lot. I’m confident that we had a lot, but I think everybody contributed in a lot of different ways,” said Hook.

Tingle joined MaGruder in double figures with 11 points. She was honored after the game for reaching 1,000 career points against Hancock County on Dec. 21. Hook said Tingle is one of three players during his tenure to hit that milestone, joining Ella White and Madison Dockter.

With the win, Henry County snaps a three-game losing streak and moves to 5-8 on the season.