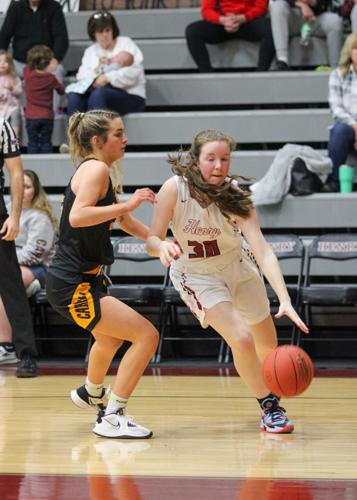 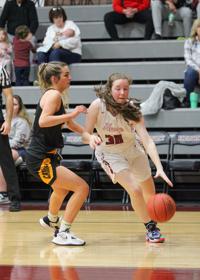 Kennedy Brown drives to the basket in the second half of Henry County’s 56-46 loss to Carroll County on Friday. Brown led the Lady Cats with 16 points. 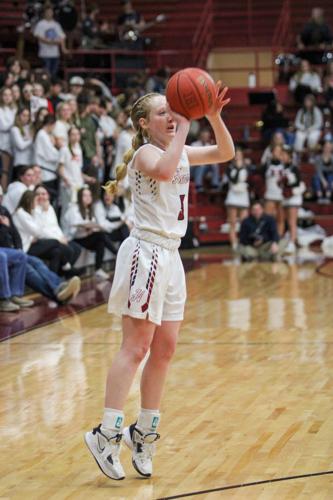 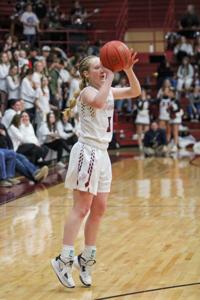 Madeline Lay drains one of her four 3-pointers against the Lady Panthers. Lay finished with 12 points.

Kennedy Brown drives to the basket in the second half of Henry County’s 56-46 loss to Carroll County on Friday. Brown led the Lady Cats with 16 points.

Madeline Lay drains one of her four 3-pointers against the Lady Panthers. Lay finished with 12 points.

“It was a frustrating result. We made a great effort, but ultimately it was not enough,” said head coach Jim Hook.

The Lady Cats led for most of the first quarter and kept the Lady Panthers out of sync on offense. The defensive efforts from Henry County forced a number of Carroll County turnovers on bad passes, which led to promising opportunities on the offensive end.

The Lady Cats jumped out to a 5-2 lead on a three from Kennedy Brown but Carroll County evened the score with a free throw and a layup.

A free throw by Brown and a wing three from Madeline Lay pushed Henry County into the lead again, but the Lady Panthers scored five straight to take their first lead of the evening with 1:27 left in the period. Ashlyn Tingle knocked down a jumper and Brown sank two free throws to send the Lady Cats into the second quarter with a 13-10 advantage.

Carroll County cut the lead to one on a floater about two minutes into the second period. The Lady Cats had a few open looks under the basket, but miscues on passes into the paint put the ball back in Carroll County’s hands and kept Henry County off the board.

Yet, the Lady Cats pushed the lead to four with 4:41 left on a three from Lay after Brown nabbed a pass from the Lady Panthers on the other end. Henry County worked the passing lanes well for most of the night to generate turnovers.

Tingle extended the lead back to four on a shot in the paint with 2:48 remaining, but Carroll County scored the final eight points of the half to lead 22-18 at the break.

“We went zone and they made a run. We settled too much away from the basket. Hitting eight threes is nice, but we took 30 and only 22 two’s,” said Hook. “It’s hard because they were all pretty open. This season has been frustrating because we haven’t taken what we do in practice to the games.”

Courtney Strickland hit the first shot of the second half in the lane and moved the Lady Panther advantage to 24-18. Meg Golden and Lay knocked down 3-pointers around a Carroll County three to cut the lead to 27-24.

The full court pressure amped up for Carroll County and the Lady Cats had a hard time getting through the press.

Brown briefly stopped the Lady Panthers’ momentum with a three on the wing with 3:26 left in the third quarter. Following her shot, Carroll County finished the period on a 9-0 run to lead 40-27 heading into the fourth quarter.

The Lady Cats got back on the board with 6:25 to go in the game on a three from Lay. Brown cut the deficit to eight with a layup, but Carroll County countered with one of its own to force a Henry County timeout.

Brown, who had a team-high 16 points, kept the Lady Cats within striking distance with two free throws and a layup.

“I’m proud of Kennedy for gaining confidence on the offensive end. She’s had a frustrating season by her standards,” said Hook.

Free throws were aplenty at the end of the game as Henry County tried to mount a comeback. Emily Herbert came off the bench and hit one of two from the line to cut the lead to 45-39.

Both teams alternated turns at the foul line until Micah MaGruder made a layup with 1:08 remaining to pull within eight.

Carroll County sank two free throws out of Henry County’s timeout before Herbert drilled a 3-pointer on the wing with 55 seconds left.

The Lady Panthers made three free throws across the final minute of play to seal the victory.

Along with Brown, Lay hit double figures with 12 points.

Playing on an injured knee, Tingle reached 1,000 career rebounds during the game. She went down again late in the game, and Hook said she likely played her last game of the season.

“I also have to talk about the loss of Ashlyn. This was very likely her last game after her ACL and meniscus tear vs. Trimble. Her toughness and desire are more than admirable, but the body can only handle so much,” said Hook. “Our hearts break for her. Her 1,000 rebounds is a testament to how hard she works, and I’m sad she didn’t get to finish the season.”

Henry County also celebrated homecoming between games on Friday. Golden was crowned as homecoming queen for the winter while Herbert took the honor in the fall.

“With Emily Herbert being fall homecoming queen and Meg Golden taking the honor in the spring I just want to say how thankful I am to be surrounded by these amazing young women,” said Hook. “I am thankful for all the support we had Friday, and I hope the fans see the effort we put forth and will come back for our remaining home slate.”