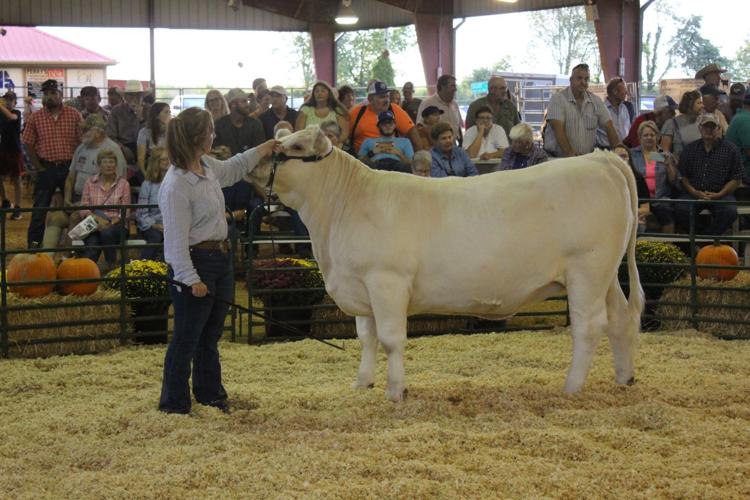 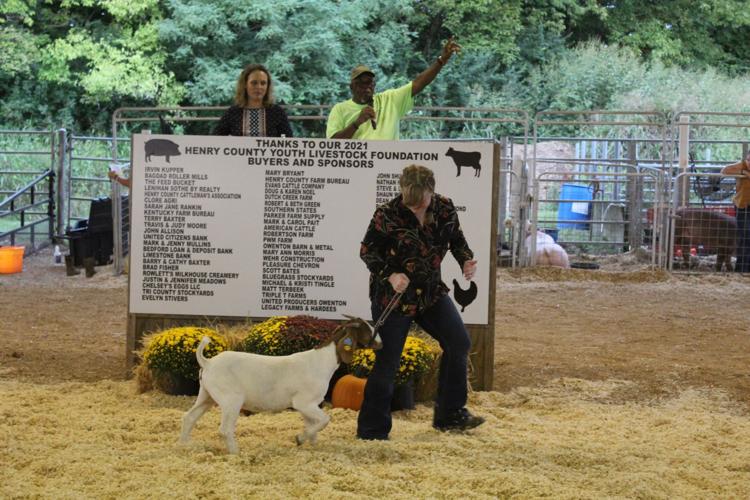 FFA student Brittany Baxter raised $2,000 at the youth livestock auction with the sale of her goat auctioned off by Rickey Timberlake. 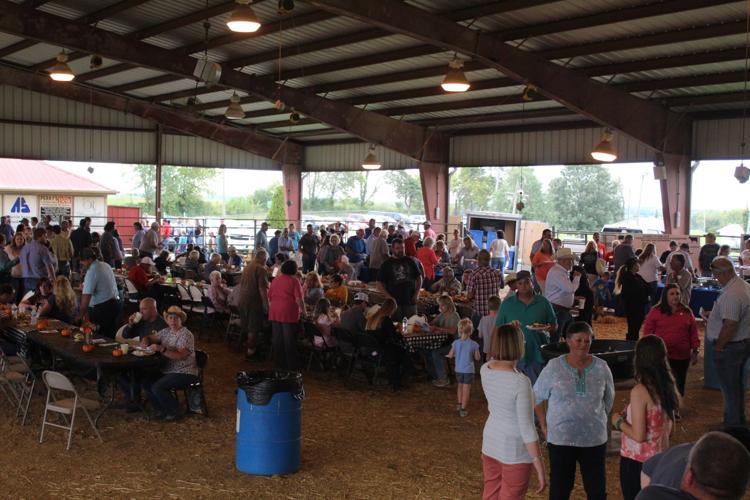 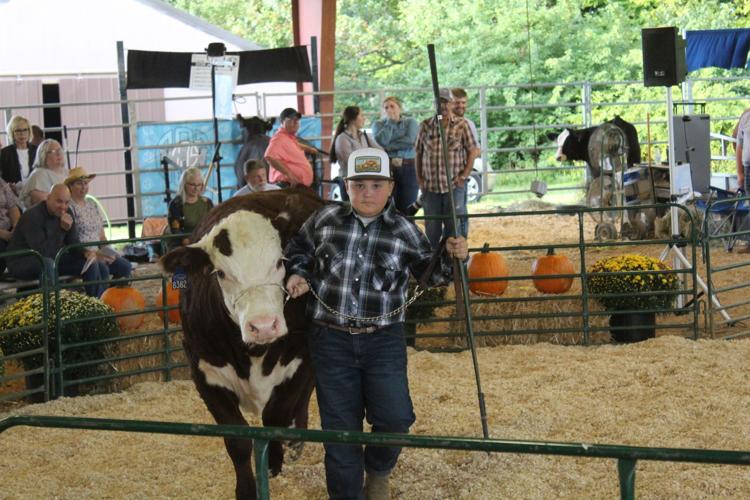 Luke Baxter shows his steer to the livestock auction crowd. The steer sold for $4,400. 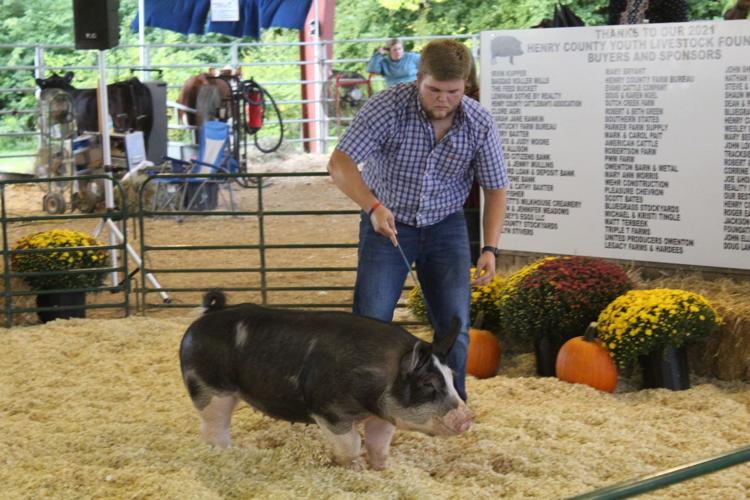 Jaxon Scriber pinch-hit for Caden Kephart to show the latter’s hog at the livestock auction. The hog brought a winning bid of $2,400. 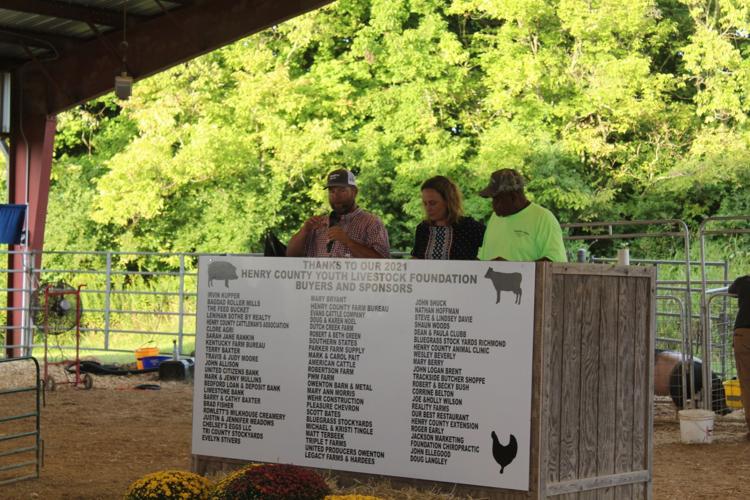 FFA student Brittany Baxter raised $2,000 at the youth livestock auction with the sale of her goat auctioned off by Rickey Timberlake.

Luke Baxter shows his steer to the livestock auction crowd. The steer sold for $4,400.

Jaxon Scriber pinch-hit for Caden Kephart to show the latter’s hog at the livestock auction. The hog brought a winning bid of $2,400.

The 5th annual Henry County Youth Livestock Auction raised $55,700 in livestock sales earlier this month at the fairgrounds with 14 Future Farmers of America and 4-H students showing their goats, hogs, steer and heifers. The auction is the signature event of the foundation bearing the auction name.

“The foundation was a group of us that got together six years ago,” said board director Justin Atchison, “and we wanted the kids to have a way to market the animals they had shown at the fairs.”

The event raises funds directly for the young farmers themselves through the sales, but also for their 4-H and Future Farmers of America clubs that help guide them in their agricultural direction.

“It benefits them again by helping fund their clubs,” Atchison said.

before the auction began. The bidding started in earnest with introductions by foundation board member Lindsey Davie and auctioneer Rickey Timberlake.

“The Youth Livestock Auction is such a special event,” said Davie, who is the Henry County High School Ag Teacher and FFA Advisor. “To see that many people come together to support these kids is amazing. Agriculture is such a vital industry and encouraging these youth in their passion and dedication to their livestock is inspiring.

“As fewer and fewer people live on farms, people are becoming uneducated about where their food comes from. Farmers do NOT get the credit they deserve. Anytime agriculture gets a positive nod I am thankful. There is no industry with people as wonderful as agriculture. They love what they do, even when it’s hard, and come together to lift each other up.”

Davie asked one of the participating students, Abigail Tingle, to express her own thoughts about the event afterwards: “I want to thank everyone who has supported and encouraged me showing livestock. It has meant the world to me. During a time when the world was turned upside down, the animal still needed me. I’ve gained so much confidence and learned skills and a work ethic that will serve me well my whole life. Again, thank you.”

Tingle, was among half of the group of 14 students who participated in the “buy-back option” for auction, which allow the students to keep their animals rather than selling them. Those participants included Catherine Noe, Brittany Baxter, Ashlynn Tingle, Tiffany Baxter, Levi Clubb and Brenna Perkins.

All told, the event raised more than $60,000 including auction sales for donated floral arrangements and other items in addition to the animal sales.

“I’d say a $5,000 minimum in additional donations and the sale of decorations and show sticks,” said Davie. “And some people came up afterwards and said ‘add this to…’ or ‘split $500 between all the kids.’”

The auction is the culmination of extensive planning.

“We have meetings year round to get prepared for this one night,” said Atchison.

Prior to the auction, president of the Kentucky Cattlemens Association, Cary King, addressed the crowd with the appreciation for the fruition of all of the hard work behind the auction.

“We’re just so blessed to live in a state where you can have events like this,” he said, adding that he hopes the upcoming generation of farmers can “think outside of the box” to help sustain raising livestock in the future.